Cindy Fazzi’s
WOW! WOMEN ON WRITING TOUR
OF
My MacArthur 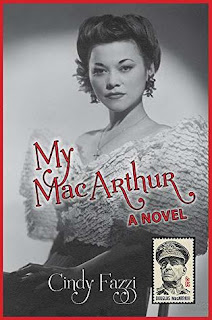 The year is 1930. The place: Manila. Douglas MacArthur is the most powerful man in the Philippines, a United States colony. He’s fifty years old, divorced, and he falls in love at first sight with a ravishing young Filipino woman. He writes her a love note on the spot. Her name is Isabel Rosario Cooper, an aspiring movie actress. One glance at his note and she thinks of him as "my MacArthur." MacArthur pursues his romantic obsession even though he’s breaking numerous taboos. She reciprocates his affection because he could open doors for her financially struggling family. When MacArthur is appointed the U.S. Army chief of staff, he becomes the youngest four-star general and one of America’s most powerful men. Out of hubris, he takes Isabel with him to America without marrying her. Amid the backdrop of the Great Depression, their relationship lasts until 1934. After four years of relationship, MacArthur leaves Isabel for fear of a political scandal. The general goes on to become the iconic hero of World War II, liberating the Philippines and rebuilding Japan, while Isabel drifts in Los Angeles unable to muster the courage to return to Manila.

My MacArthur is now available to purchase on Amazon.com as an e-book (and print) as well as at Barnes and Noble.

Douglas MacArthur. Her pulse quickened as she read the name. His neat handwriting exuded confidence, but just the same, his note struck her as an anomaly, a mistake. The white man who acted as his messenger stood next to her at the bar.
Men of all ages filled the Olympic Boxing Club, waiting for the fight to begin. Filipinos, Americans, and Europeans caroused and mingled freely here, unlike the Elks or the Army and Navy Club, which banned Filipinos. The foreigners sat at the tables, drank Cerveza San Miguel, and smoked cigars. The Filipinos stood at the cheap section of the club, jostled and bet among themselves.
“I’m Captain Ed Marsh, by the way.” The messenger extended his hand.
An American officer in civilian clothes. It was Saturday night, after all.
“A pleasure to meet you, sir.” She shook his hand, but withheld her name.
Isabel Rosario Cooper came to the club in search of her brother, or rather his car. She needed Ben to drive her to the Manila Carnival.
Women didn’t come here because they didn’t watch boxing, so when she stepped inside the club, she’d grabbed everyone’s attention without trying. The men had erupted in whistles and cheers. The crowd had parted as she crossed the room. Just the way she liked it. She was born to part crowds—to turn heads. For an aspiring actress, every place was a stage.
Who knew MacArthur sat amid the boisterous horde? She read the note again. I can’t help but notice your gracious presence. I would love it if you can favor me with your company. Please join me for dinner at The Grand.
This time, the words made sense. Not a blunder on his part or a misinterpretation on hers. The message hit her like a jackpot—bigger than the Carnival Queen title that her best friend, Nenita, aimed for. He was the most important man in the Philippine Islands. He could open doors for her and her family.
She stopped herself from blurting out a yes!  She couldn’t afford to give herself away. Nothing compelled a man to pursue a woman more than her lack of interest.
“Who’s Douglas MacArthur?” She stood with the note in one hand and her silk purse in the other hand. Chin up and chest out, despite the sweat underneath her lace blouse. Her skirt squeezed her waist and constricted her breathing, but she’d worn it because it displayed her figure. The stifling humidity now made her regret her choice. Even the garter belt and stockings itched in such heat.
“You’ve never heard of Douglas MacArthur?” His eyes widened.
She shook her head. A saxophone wailed, distracting them both. They turned toward the elevated boxing ring—empty. Below it, a band warmed up.
Captain Marsh offered her a pack of Lucky Strike. “Care for a cigarette?”
“Why, thank you.” She tucked her purse under her armpit and took one stick, which he lit with a lighter. They stood side by side, watching the band.
“Do you see the gentleman in the middle?” He pointed at a table not far from the band.
“Yes.”
“That is Douglas MacArthur.”
The man stared at her while smoking a long-stemmed pipe, the bowl shaped like a corncob. He didn’t smile. The band played a jazz-style rendition of a Filipino folk song. The audience, packed ten deep, hooted and screamed for the fight to begin, but MacArthur didn’t even blink.
She glanced at his note again before inserting it in her purse.  “This is nice. But I don’t know him.”
“It’s unbelievable. You really don’t know him?”
She shook her head and shifted her weight to one hip.
“He’s the Big Cheese!”
She arched her eyebrow.
“Major General MacArthur is the most powerful American not just in the Philippines, but in Asia.”
She took a drag on her cigarette. “I know what big cheese means, thank you.”
MacArthur stood out in his expensive suit, slicked-back hair, and intimidating pipe, but he was as old as her father, if not older. His title was commander of the U.S. Army’s Philippine Division, though everyone treated him like a king.
He stared with a cool expression, pretending to be uninterested. The man was an actor. Perhaps they were not too different.
https://www.cindyfazzi.com/my-macarthur-book-excerpt

Cindy Fazzi is a Filipino-American writer and former Associated Press reporter. She has worked as a journalist in the Philippines, Taiwan, and the United States. My MacArthur, published by Sand Hill Review Press, is her literary debut. She writes romance novels under the pen name Vina Arno. Her first romance book, In His Corner, was published by Lyrical Press in 2015. Her second romance novel, Finder Keeper of My Heart, was published by Painted Hearts Publishing in 2018. Her short stories have been published in Snake Nation Review, Copperfield Review, and SN Review.

You can find Cindy at -

Blog Tour Dates
November 5th @ The Muffin
What goes better in the morning than a muffin? Stop by Women on Writing's blog and read an interview with the author Cindy Fazzi and enter to win a copy of the book My MacArthur.
http://muffin.wow-womenonwriting.com

November 6th @ Coffee with Lacey
Get your coffee and stop by Lacey's blog where she share her thoughts on the book My MacArthur.
http://coffeewithlacey.wordpress.com/
November 7th @ Beverley A. Baird's Blog
Stop by Beverley's blog and find out what she thought about Cindy Fazzi's book My MacArthur. This book is sure to entice historical fiction readers everywhere!
https://beverleyabaird.wordpress.com/

November 8th @ The Frugalista Mom
Stop by Rozelyn's blog and catch her thoughts on the historical fiction book My MacArthur.
https://thefrugalistamom.com/

November 9th @ The Frozen Mind
Grab a blanket and stop by the blog The Frozen Mind and read their thoughts on the incredible historical fiction book My MacArthur.
https://thefrozenmind.com/

November 11th @ Bring on Lemons
If life hands you lemons, read a book! Come by Crystal's blog Bring on Lemons and find out what she had to say about the book My MacArthur.
http://bringonlemons.blogspot.com/

November 13th @ Mommy Daze: Say What??
Want to know what this mom had to say about the book? Stop by Ashley's blog and read her thoughts on the historical fiction book My MacArthur.
https://adayinthelifeofmom.com/

November 16th @ Amanda's Diaries
Find out what Amanda had to say about Cindy Fazzi's historical fiction book My MacArthur in her review today.
https://amandadiaries.com/

November 19th @ Madeline Sharples Blog
Be sure to catch today's post over at Madeline's blog author Cindy Fazzi shares her tips for writing fiction about a famous person.
http://madelinesharples.com/

November 20th @ Let Us Talk of Many Things
Visit today's blog where you can catch Cindy Fazzi's post on overcoming prejudices against romance writers.
https://ofhistoryandkings.blogspot.com/
November 21st @ Mam's Rants and Reviews
Stop by Shan's blog where she shares her thoughts on the historical fiction book My MacArthur.
https://shanelliswilliams.com/

November 25th @ The World of My Imagination
Catch Nicole's review of the book My MacArthur and find out what she had to say about this fantastic book.
http://theworldofmyimagination.blogspot.com

November 28th @ Charmed Book Haven Reviews
Visit Cayce's blog and check out her thoughts on the book My MacArthur by Cindy Fazzi.
https://charmedbookhavenreviews.wordpress.com/

November 30th @ The Uncorked Librarian
Make sure you stop by Christine's blog and read what she thinks about the book My MacArthur.
https://theuncorkedlibrarian.com