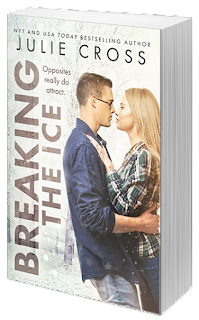 
The second book in the Juniper Falls series from NY Times and USA TODAY bestselling author Julie Cross, perfect for fans of Miranda Kenneally and Abbi Glines.
Haley Stevenson seems like she’s got it all together: cheer captain, “Princess” of Juniper Falls, and voted Most Likely to Get Things Done. But below the surface, she’s struggling with a less-than-stellar GPA and still reeling from the loss of her first love. Repeating her Civics class during summer school is her chance to Get Things Done, not angst over boys. In fact, she’s sworn them off completely until college.
Fletcher Scott is happy to keep a low profile around Juniper Falls. He’s always been the invisible guy, warming the bench on the hockey team and moonlighting at a job that would make his grandma blush. Suddenly, though, he’s finding he wants more: more time on the ice, and more time with his infuriatingly perfect summer-school study partner.
But leave it to a girl who requires perfection to shake up a boy who’s ready to break all the rules.

Review ♥ ♥ ♥ ♥ ♥
So in love with these two chapters! You need this book. It's funny, lovable and I'm totally addicted.

Breaking the Ice is book two in the Juniper Fall series. We met Hayley in book one, however, both books are standalone stories and can be read on their own. This one is more fun and less intense than Off the Ice.

Hayley is Queen Bee, Juniper falls raining princess and captain of the cheerleaders. She is a stereotypical character and loveable. She's popular, more interested in cheerleading than school work and has simple goals. Unfortunately, she finds herself in summer school and needs to pass with flying colours. Her best friend Jamie is also in her class but he won't graduate if he fails. They need help. Failure is not an option.

Fletcher is part of the hockey team, but he likes to keep his head down. He keeps himself to his self. His youngest cousin Cole has a crush on Hayley. Fletcher ends up sitting behind her in summer school which he is attending for extra credit. Cole wants him to put a good word in for him. Before Fletcher knows what's happening he's agreeing to be her assignment partner and inviting her over. Cole will get his chance to talk to her if he can stop blushing.

Fletcher is a mystery Hayley can't leave alone. He's smart, cute and definitely hiding a thing or two. She manages to convince him to be her assignment partner but soon realises he has a hidden agenda. She wants an A but she wants to work for it. Fletcher is going to struggle to shake her. She's determined and stubborn just like him.

Fletcher doesn't want attention from people at school and the Juniper Princess isn't keeping a low profile. He doesn't see her coming and he can't shake her off. Before he knows it he has extra hockey practice with Jamie and Hayley trying to find out all of his secrets.

I love this book. I don't want to give too much away so I've tried to be cryptic. Fletcher comes across as a little standoffish at first, but with good reason. The story is full of great side characters and some comical moments.

I feel like there could be a sequel to this book and I want more of Hayley and Fletcher's story. I want to know what happens when the book is over. This book does have a good happy ending. I just want more! 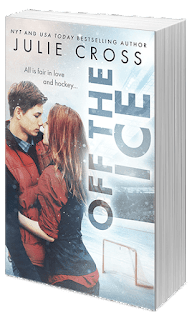 All is fair in love and hockey…

Claire O’Connor is back in Juniper Falls, but that doesn’t mean she wants to be. One semester off, that’s what she promised herself. Just long enough to take care of her father and keep the family business—a hockey bar beside the ice rink—afloat. After that, she’s getting the hell out. Again.

Enter Tate Tanley. What happened between them the night before she left town resurfaces the second they lay eyes on each other. But the guy she remembers has been replaced by a total hottie. When Tate is unexpectedly called in to take over for the hockey team’s star goalie, suddenly he’s in the spotlight and on his way to becoming just another egotistical varsity hockey player. And Claire’s sworn off Juniper Falls hockey players for good.

It’s the absolute worst time to fall in love.

For Tate and Claire, hockey isn’t just a game. And they both might not survive a body check to the heart.

Question One: I love the mystery created around Fletcher's character. Was he a fun character to write?


Fletcher was soooo fun to write! He’s basically a combination of the heroes in two of my favorite 80s/90s movies: Dirty Dancing and Rudy. If you haven’t seen them, go watch them now. If you love them like I do then definitely read Breaking the Ice!


Question Two: Haley's character is stereotypical of a head cheerleader. She's loveable and has simple goals. I like this about her because it shows not all Queen Bees are mean girls. Did her character turn out the way you expected when you started writing Breaking the Ice?


Haley’s character definitely took some turns and developed depth and layers I hadn’t expected. But this happened mostly while writing Off the Ice, the first book in the series (it’s a companion so no need to read it first). When I first began Off the Ice, I picked a song to represent each character. Haley’s song was She’s So Mean by Matchbox20. By the time I started Breaking the Ice, I knew who Haley was, I just needed her to figure this out. And also a lot of the people in her life.


Question Three: Jamie and Hayley in summer school. How did they take the news? How would they have spent their summer if not in school?


Jamie would have definitely slept in late, partied late into the night if he hadn’t had the weight of summer school and his still pending high school diploma. Haley would have scheduled more cheer practices, more volunteer work, and probably lots of babysitting jobs if she didn’t have summer school.


Question Four: Cole, Fletcher's cousin must have been crushed when he realised he didn't have a future with Hayley. How did he realise she liked Fletcher? Was he happy for him?


The thing about teenagers is they only think they’re being sneaky and hiding their feelings but usually, it’s pretty obvious who likes who. Cole wouldn’t have had much trouble noticing this even if it took Fletcher a while to come clean about his feelings for Haley. Beyond Cole’s crush on Haley, he really does like her as a person and I think he wants Fletcher to have someone amazing to love him. So yes, I’d say he’s very happy for Fletch.


Question Five: Did Hayley make it to Florida and who did she take with her?


She definitely made it to Florida. She probably took her mom because she’s a family girl. Or possibly Claire because she trusts her and Claire’s already in college and has lots of experience in this area.


Question Six: What can we expect next from this series?


In book three you’ll get to know the Prince of Juniper Falls and see what happens when the star of the hockey team breaks the rules. And you might even see the start of a girls hockey team at Juniper Falls high!


Thank you so much for answering my questions. I love this book and can't wait for more! 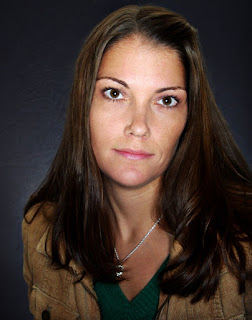 Julie Cross is a NYT and USA Today bestselling author of New Adult and Young Adult fiction, including the Tempest series, a young adult science fiction trilogy which includes Tempest, Vortex, Timestorm (St. Martin's Press). She's also the author of Letters to Nowhere series, Whatever Life Throws at You, Third Degree, Halfway Perfect, Chasing Truth, Off the Ice and many more to come! Julie Cross was a longtime resident of central Illinois but has recently moved her entire family across the country to continue her academic studies at Stanford University.