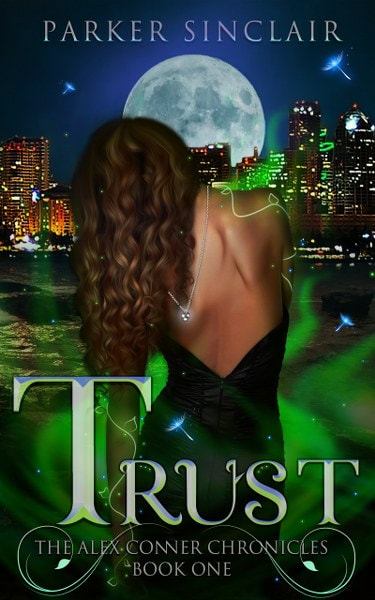 Alex Conner’s memories of the vile man she exiled using supernatural powers inherited from her mother are all but breaking into her living hours, and nothing is working to keep her nightmares at bay.

Can Alex solve this mystery before it's too late or will she be the one responsible for bringing this horror back into her life?

Who can Alex trust and how is she to deal with the draw she has towards a new man in her life – a man who is definitely more than meets the eye?

Alex Conner: Witch? Healer? Both? Joining this powerful female character and a scooby-like cast including a seer, sexy book boyfriends, devoted best friends, heros, villans and monsters, and magical creatures. Enjoy the first book in this ongoing paranormal and fantasy series overflowing with suspense, steamy and romantic scenes, kick ass action, intrigue, adventure, mind-bending plotlines, and laugh out loud humor. Trust is a coming of age story about a young women who had to figure out her powers all on her own. The new adult tale will get you laughing, crying, while also being a nailbiter as supernatural powers and beings make this a page turner for paranormal, mystery, suspense, and fantasy fans.

Trust is a unique twist on paranormal romance, contemporary & urban fantasy for fans of The Hollows by Kim Harrison's, with the humor, heart, and horror of Buffy the Vampire Slayer, the magic of The Weird Girls Series by Cecy Robson, & the science and world building of The King Killer Chronicles.

I’m just about to hightail it down the side alley to the back door—thinking how nuts I am to be willing to jump out of a cake and hoping like hell that Nic has a good wig for me—when I catch a glimpse of movement over my shoulder. As I spin around, I come face to face with a well-built stranger whom I’ve never seen before. He’s gorgeous, but a sensation crawls over my skin, like a tingle of electricity, both gentle and warning. A sound escapes my lips, not in the least bit smooth, rather more of a squeak. His reply is a bit subtler as the corners of his mouth turn up slightly. Now, I’m not saying I feel scared, for some reason I’m not, even though I damn well should be. Here I standing here in the dark with a man I don’t know who looks like he could punch through a wall without breaking a sweat, but something about him just makes me calm.
“I’m Ryan. I’m leading the security team here tonight. You’re Alex Conner, right?” He gets straight to the point, looking as if this is his usual MO, and all I can do is nod. I think I’ve forgotten how to blink or even breathe. Ryan reaches down and brushes my waist to tap the tiny radio clipped to my slim belt.
“We’re on channel five. Let me know if you need anything.” And then he vanishes, blending his fine body in with the night.
“Shit, shit, shit,” I curse as I barrel into the woman’s bathroom, nearly killing Nic as I haul ass into the back stall. Nic follows me in, looking eager with a wicked smile on his face.
“Now, I hope no one needs this stall cause this may take a while. What are you waiting for, girl? Take your clothes off. Wait a minute. What is that look? Where is he? He must have been fine, because you are glistening.”
He was fine, over six feet of pure muscle, but not overly so. Hard everywhere, and decked out in all black from head to toe. His skin looked like it had been dipped in a mix of cinnamon and mocha, but I couldn’t place his heritage. Latino, or maybe from some remote tropical heaven, or, goddess I don’t care, he was gorgeous and terrifying—don’t forget terrifying. He was like a taciturn, dark-eyed stone God, but the air around him seemed to crackle with a promise of squashing anything or anyone who causes trouble tonight; and those hands and lips.
“Damn it. Why is it so hot in here?” I am pulling my clothes off and putting the barely there clothes on, rambling about dark eyes, skin, and almost peeing myself. 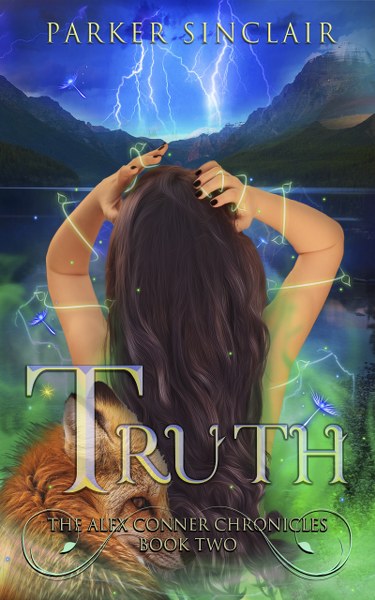 Party time's over; now it's time to kick some ass.

Now that I can no longer deny my heritage as a powerful magic-wielding Earthen Protector and healer, everything comes crashing down around me. My estranged mother has enlisted my help in finding my Healer father; a man who was presumed dead since before I was born.

While I wait and train with Dana, the Mistress of Weaponry and Potions, innocent people, some who I dearly love, face unspeakable horrors. My small, yet powerful, group of companions confront danger head-on while we hunt down those responsible.

Is my father really alive and will the training prove to be enough for me take on new ruthless enemies?

As if the threats in my life weren't enough for me to handle, my feelings for two men have me torn and tempted.

Taking in the landscape around me, I’m mesmerized by the colors in the sky. The blues, purples, pinks, and reds look like watercolors, swirling amongst traces of clouds as the sun begins to set. The desert, though the plant life is primarily muted in color and stunted in growth, is still vibrant against the red, sandy dirt. Tall cylinder saguaro cacti reach into the night sky like long fingers escaping the earth, reaching helplessly for the stars.
I take it all in, every part of the Arizona desert, even the rustle of wind through the small leaves of the sage bush, inaudible to the human ear, but not for me. I sense the scratching sound of burrowing insects in the sand, and scorpions under stones. I even hear Dana’s heartbeat; it thumps in time with the pulse of Gaia herself, of the Earth’s goddess who allows me to harness her Earthen energy.
I splay my fingers towards the earth, willing Gaia to share her power. A tendril, merely a whisper of power, like static electricity, rushes into my fingertips and I force it to move into my being. Still drawing upon the earth, I drive some of the power into each crevice of my body and into my mind, holding it there, keeping it stored, so I don’t have to stop and seek out more during this duel with Dana. Looking down, I spot emerald green vines sending off bursts of power—the visualization of my ability, that only Earthen Warriors like myself can see—weaving around my arms. My grandmom’s icy blue dandelion dances along the twining vines, and I smile at her presence.
A buzzing hits my awareness; I’m in tune with the world around me, sensing everything, even the sound of Dana’s flowing white dress nearly 100 feet away from me. What never escapes my awareness over the last few weeks is the heavy band of metal constantly banging against my chest and it’s my own damn fault. For some reason, I cannot get rid of the ring. What else can I do? I tried to leave the ring in San Diego the night I left with Dana instead of following the plan to find Greg with Ryan. I placed the ring in an envelope and left it on my coffee table with a note, knowing Sandra or Ryan would find it, but I woke in Dana’s car to find it snugly attached to my right ring finger again.


Desert sand flows around me as I exert more force, arcing and sending my staff into a spin, smacking glowing balls of fiery light out of the air. At first, Dana sends them to me all nice and sweet-like, spinning the bright balls of light—the size of a racquetball—around me lightly, and giving me a chance to whack a few. Though, I think she’s trying to get me dizzy, off my game, and on my ass.

To be honest, my true power lies within my skills as a Seer. Alex says that my vixen skills are just “icing on the cake.”

Sandra is a bombshell. She also happens to be a Seer, and Earthen Protector Alex Conner’s best friend. When Alex goes missing, Sandra seeks help from the one person she is forbidden to contact.

Can Sandra, and those she used to be closest to, finally move past all the fear and mistrust?

Discover Sandra’s dark and hidden past, one that even Alex doesn’t know about, in this intense novella, and get a peek at what is in the cards for their future.

“This story has action, excitement and suspense. It is about forgiveness
and the past colliding with the present.” ~ Amazon Reviewer


Forbidden is a unique twist on new adult paranormal romance and supernatural suspense for fans of The Hollows by Kim Harrison; with the humor, heart, and horror of Buffy the Vampire Slayer; and the magic of The Weird Girls Series by Cecy Robson. 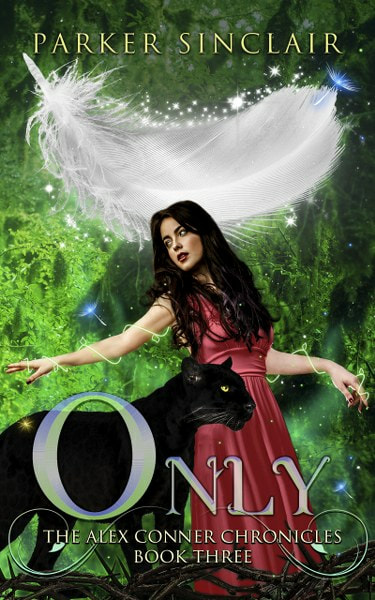 Only
The Alex Conner Chronicles Book 3

Sometimes you just have to keep your mouth shut and play along; the quiet is best for plotting, and I am getting out of here.

One would think the sassy, sexy hybrid Earthen Protector and Healer Alex Conner deserves some downtime after all she’s been through. But no. Instead, she finds herself trapped by the king of the Fae, and he’s not letting her go until he gets what he wants.

As alternate realities tangle her in confusion and bring her close to forgetting who she is and everyone she loves, will she unwittingly give the king what he craves?

If she does escape, will she ever pick up where she left off with her sexy Adonis Ryan?

And can she control the new power she never knew she could wield—one over life and death itself—or will she be entangled in a realm whose ruler is hell-bent on entrapping her and someone she holds dear, forever?

Only is a unique paranormal/supernatural romance & contemporary fantasy novel for lovers of the metaphysical, romantic fantasy, & elementals with romantic and dark fantasy elements. Only is enjoyed by fans of The King Killer Chronicles, Sunshine, The Hollows, The Weird Girls, and The Shannara Series & Buffy the Vampire Slayer. 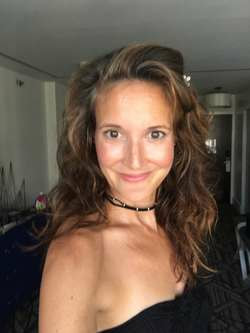 Parker gives credit to the development of her imagination and passion for writing to multiple childhood destinations lacking indoor plumbing. She would never trade the childhood her parents gave her, and she thanks them for raising her to have her own thoughts, dreams, and bountiful imagination. Oh and she wishes to thank them for teaching her that one should never leave their jeans on the floor of an everglades campground shower--lest she do the dance of the scorpions in the pants again!