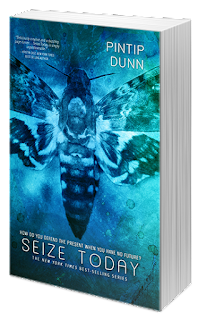 Seventeen-year-old Olivia Dresden is a precognitive. Since different versions of people’s futures flicker before her eyes, she doesn’t have to believe in human decency. She can see the way for everyone to be their best self-if only they would make the right decisions. No one is more conflicted than her mother, and Olivia can only watch as Chairwoman Dresden chooses the dark, destructive course every time. Yet Olivia remains fiercely loyal to the woman her mother could be.

But when the chairwoman captures Ryder Russell, the striking and strong-willed boy from the rebel Underground, Olivia sees a vision of her own imminent death…at Ryder’s hand. Despite her bleak fate, she rescues Ryder and flees with him, drawing her mother’s fury and sparking a romance as doomed as Olivia herself. As the full extent of Chairwoman Dresden’s gruesome plan is revealed, Olivia must find the courage to live in the present-and stop her mother before she destroys the world.

"Are you sifting through my possible pathways?" he asks, his voice husky.
I freeze. But if I'm a block of ice, his fingers do their job, tracing my lips again and again until I melt. "How…how do you know?"
"Your eyes," he says. "They dilate when you're reaching into the future. I'm starting to learn when you're not here."
I blink. Nobody's ever told me that before.
"You…noticed?" I ask.
"I notice everything about you," he says easily. "So, tell me. What did you see in our possible futures?" His voice is low and liquid, and it reaches inside me and caresses parts I didn't know existed. "What did I do? More importantly, what did you like?"
Heat floods my face. "What, exactly, are we talking about?"
"I don't know." His eyes gleam wickedly. "What do you think we're talking about?"
"Future pathways," I snap. If I have to electro-whip my attention back on track, I'll do it, damn the Fates. "I see everything from me slapping you to…" I trail off, and my cheeks flame even hotter. Oh my. I can't possibly put into words the images flying through my head like a hailstorm.
"Now I'm really intrigued." He moves his hand to my hair, tugging slightly. I feel the tension all the way to my toes. "Are you really not going to tell me? Because, you know, then I'll have to guess."
"I'm not going to tell you," I whisper.
His lips curve in a mischievous grin that makes me want to tuck him in my pocket and keep him forever. And then, while I'm still reeling from his cuteness, he leans in.
I'm not ready. My mouth is partway open, and I'm in the middle of a breath. He kisses me anyway. I shut my mouth in a hurry. Lips, so soft. His back and shoulders, so hard. Holy Fates, that was his tongue. His tongue, slipping between my teeth. Sparks. So many sparks, igniting in the air around us.
"How's this?" he whispers against my mouth. "Did you see this in our future?"
I nod helplessly.
He moves closer, scooping me up and shifting me on the mattress so that he can lie next to me. Our foreheads touch; so do our knees. "And this? Was this in some of our pathways?"
I nod again, but that doesn't seem to satisfy him anymore. His eyes intent on mine, he catches my lower lip between his teeth. "Do you like it?"
Do I like it? What kind of question is that?
I've tasted every emotion in our world. I know the sorrow a mother feels when she clasps her deceased baby to her chest. I know the pride of a gold-star athlete when he stands on a podium and accepts North Amerie's highest honor. I know the rage that silences the heart of a murderer as he cuts short another's life.
I even know kisses—hot, frenzied, passionate, fumbling, sweet, aching, innocent kisses. I've seen them all in other people’s futures, thousands of kisses, millions of kisses, as varied as the pathways themselves.
And yet…and yet…I've felt nothing like kissing Ryder. Even the vision of this moment itself.
So, yeah, I like it. It scares me how much I like it.


OTHER BOOKS IN THE SERIES 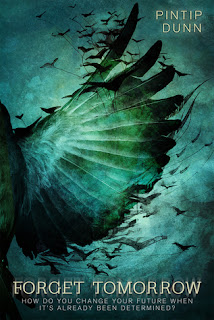 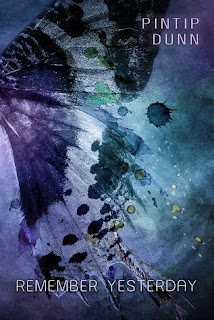 Questions One: I love how beautifully crafted this series fits together. A small event in one book unravels to be a significant action in another. How did you manage this? Where all 3 books planed out from the beginning?

Thank you so much! That is one of the nicest compliments I can receive about this series because I worked so hard to make sure all three stories were interwoven.

The truth is, however, these connections were not planned from the beginning. Can you keep a secret? When I wrote FORGET TOMORROW, I only had a vague idea of what would happen in the next two books. I knew that I wanted REMEMBER YESTERDAY to be about Jessa, for example, but the plot only existed in broad strokes. So…the way I made these connections happen was to look for something in an earlier book upon which I could expand. Thus, when you read about an event that was merely mentioned in a previous book, it appeared as if I had deliberately planted that detail all along. Shhh!!!! Don't tell anybody, though! Let's all pretend that I just had that much foresight!

Question Two: Do you have a favourite Character? Who is it and why?

Oh no! This question! It's the hardest one because it's like asking a parent who her favorite child is. And as I always tell me kids, they're all my favorite!

But...if I have to be completely honest, I would say that Olivia is my favorite heroine. She carries the burden of everyone's futures, and she still manages to emerge from her circumstances strong and courageous.  Plus, she's so lonely, so isolated, so uncertain if she is worthy of love. I really enjoyed giving her that family and sense of belonging she wanted more than anything.

My favorite hero, hands down, is Tanner. Oh gosh, now I feel super guilty saying that, because I love Logan and Ryder, as well... But it's Tanner! Brilliant, arrogant, and swoony, but with such an awful, broken past. I love his relationship with Jessa, and I love how far he is willing to go to redeem his mistakes. (Now, that statement makes me think about how far Callie would go to save her sister, and that makes me wonder if perhaps she is my favorite! See?! It's an impossible question!)


Question Three: Olivia can see people's future pathways, but cannot influence the outcome of their choices. This must be very frustrating for her. How did you come up with the idea for her character?

From the beginning, Olivia was always the only true precognitive of her time, but I didn't really start unpacking what this actually meant until REMEMBER YESTERDAY and SEIZE TODAY. It made sense to me, at the end of Book 1, with Callie's act of sacrifice, that there wasn't only one future for people, but dozens, hundreds, even thousands of different branches, and which path you traveled depended on the decisions you make. Given that this was my vision of the world, Olivia would have to see every single one of these pathways. I envisioned a little girl with the weight of not just one world, but rather, a nearly infinite number of worlds on her shoulders. To make matters worse, she doesn't have anyone's love to help alleviate the burden, and her only family is the cold, unfeeling Chairwoman. Of all my heroines, she is the one who makes the biggest decision and has the greatest impact -- so I had to make sure she was up to the challenge. Choosing the only true precognitive to fulfill this role was logical.

Question Four: Ryder is the one variable Olivia couldn't understand. They are very different and Trust is big part of their relationship. What made you pair this duo together?

I really wanted to pair Olivia with someone who can give her what she needs most. And what she needs most is someone who will put her first. Ryder can understand and connect with Olivia because of his past. His parents chose to abandon him as a little boy in order to save his brother, so he, too, has felt like he’s never been first in anyone's life. In the end, he is able to put aside his issues of trust because of his love for Olivia, and that in part gives her the strength to make the decision she knows is right.


Question Five: Seize Today is the final story in this series and I've loved every minute of it. What will be your next adventure?

Aw, thank you so much. That really means a lot. I am so excited about my new sci fi duology, FIT TO DIE, which launches next June. This was actually the first book I sold, and I put my whole entire heart into the writing of it. The reason it is only coming out next year is because my publisher wanted Forget Tomorrow to be my debut, and we had to publish all three books in that series first.

FIT TO DIE is about a world where nutrition can be transferred via a pill, and society is split into Eaters and Non-Eaters. Princess Vela has been tasked with finding someone "fit to die" so that her father the king may continue to live...only to discover that the best candidate is the boy she's loved all of her life.

I cried buckets of tears while writing this book, and I absolutely can't wait to share it with my readers! 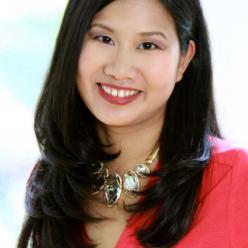 Pintip Dunn is a New York Times bestselling author of YA fiction. She graduated from Harvard University, magna cum laude, with an A.B. in English Literature and Language. She received her J.D. at Yale Law School, where she was an editor of the YALE LAW JOURNAL. Pintip's debut novel, FORGET TOMORROW, won the RWA RITA® for Best First Book. In addition, it is a finalist for the Grand Prix de l’Imaginaire, the Japanese Sakura Medal, and the MASL Truman Award. THE DARKEST LIE was nominated for a Romantic Times Reviewers’ Choice Award. Her other books include REMEMBER YESTERDAY, the novella BEFORE TOMORROW, and GIRL ON THE VERGE. She lives with her husband and children in Maryland. You can learn more about Pintip and her books at www.pintipdunn.com