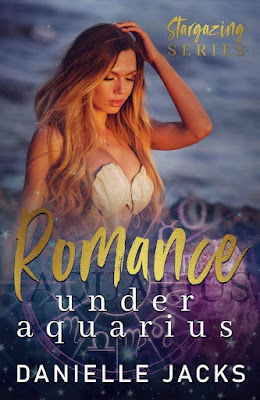 ★.•°`☆ COVER REVEAL ☆`°•.★➜ #CoverReveal for #Danielle Jacks with #PhoenixBookPromo➜ Romance under Aquarius (Book #1 in The Stargazing series) by Danielle Jacks➜ Hosted by Phoenix Book Promo ➜ @chaptersthroughlife1 @phoenixbookpromo➜ Cover Design by Eleanor Lloyd-Jones at Shower of Schmidt Designs➜ Release Date: 18th February 2022➜ Add to your TBR: https://bit.ly/3IhNjdzSynopsisRomance under Aquarius is book 1# of the Stargazing series, a 12-book series of standalones. KasperWhat would you do for your dying brother?Would you travel the world and swim to the deepest depths?If I told you Greek mythology speaks of a water healer under the zodiac sign of Aquarius, would you consider going after it?MarisWhat would you do if you found out your fiancé was cheating on you?Would you fight your father’s decision to have you marry him?If I told you your opinion wouldn’t change a thing, would you fight to be heard or maybe run away?PashaWhat would you do if the only person you loved was intended for your best friend?Would you sacrifice your own happiness for theirs? If I told you your future following others’ rules would make you miserable, would you step in line?RynWhat would you do if you found out you could be king but you’d have to marry someone you didn’t love?Would you try to make it work?If I told you the princess is destined for more than you can offer, would you help her?