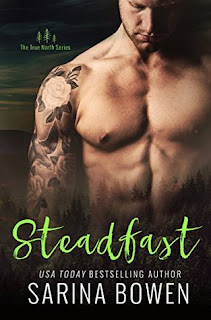 She’s the only one who ever loved him—and the only one he can never have. Jude lost everything one spring day when he crashed his car into an apple tree on the side of the road. A man is dead, and there's no way he can ever right that wrong. He’d steer clear of Colebury, Vermont forever if he could. But an ex-con in recovery for his drug addiction can’t find a job just anywhere. Sophie Haines is stunned by his reappearance. After a three year absence, the man who killed her brother and broke her heart is suddenly everywhere she turns. It’s hard not to stare at how much he’s changed. The bad boy who used to love her didn’t have big biceps and sun-kissed hair. And he’d never volunteer in the church kitchen. No one wants to see Sophie and Jude back together, least of all Sophie's police chief father. But it's a small town. And forbidden love is a law unto itself.

Amazing! This series is going so well for me. I loved the first book and I never thought I could equally like this one but I do. Sophie is a beautiful character inside and out. Her heart has always belonged to one man. The problem is that one man feels unworthy. That one man has made mistakes. Big ones. Jude went to prison for substance abuse and killing Sophie’s brother. He wants to get on with his life but love isn’t something he hopes for. His heart still belongs to Sophie and his addiction is an everyday struggle. In the first book, we see Jude working at the farm. He’s hardworking and keeps his mind busy. Now the apple season is over and he’s returned to his home town. He’s not welcome by many. Sophie’s dad is the town sheriff and his son was the golden boy. One of the many things I liked about this book is that Jude wasn’t Sophie’s brother's friend. This worked really well and I liked the way he had eyes only for Sophie. He wasn’t a good kid who ended up on the wrong side of the tracks. Jude was always his own person and he brought out a different side to Sophie. This story tells Jude and Sophie’s story. It’s bittersweet. It’s gritty and heartwarming. It’s perfect. 5 out of 5. Loved it.