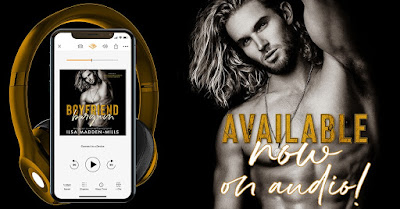 Wall Street Journal best-selling author Ilsa Madden-Mills returns with a swoon-fest of a novel about what happens when you take a chance on love.
Boyfriend Bargain, a sexy and emotional sports romance from Ilsa Madden-Mills and narrated by Savannah Peachwood and Stephen Dexter, is now available on audio!
Listen today!
Amazon Audible: https://amzn.to/2XuCr56
Amazon Audible Worldwide: http://mybook.to/BoyfriendBargainaudio
Tantor: https://adbl.co/2I7fpvX
Wanted: one hot guy with rock-hard abs and a big stick.
Broke and desperate, Sugar Ryan has no use for arrogant, bad-boy athletes...until she's forced to bargain with the cockiest of them all.
If only he knew she was alive.
Her mission? Get on this hockey player's radar any way possible.
Zack Morgan is the king of the ice and the bedroom, but nothing prepares him for the mystery girl who shows up everywhere he does - frat parties, his favorite bar, and finally his front door with an offer he can't refuse. The only rule in her boyfriend bargain: no falling in love.
But after one (um, two) smoking-hot hookups, he's done with pretending and vows to make their fake relationship real. Too bad she can't trust a player with a reputation for breaking hearts.
Will this hockey star score his forever girl, or will this boyfriend bargain end in heartbreak?
Posted by DanielleDuncan at 06:30