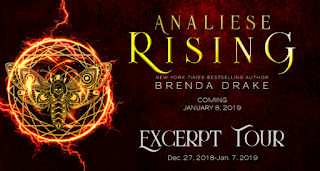 American Gods meets the Da Vinci Code in ANALIESE  RISING (Entangled; 01/08/19),
a suspense-filled novel by New York Times bestselling author Brenda Drake.
This first book in a new fantasy series offers a new take on the paranormal romance genre
—with a mythological spin. Gone are vampires and werewolves; in are descendants of
the God of Death.


series with strong female characters (Library Jumpers and
The Fated) and her fans will not be disappointed. 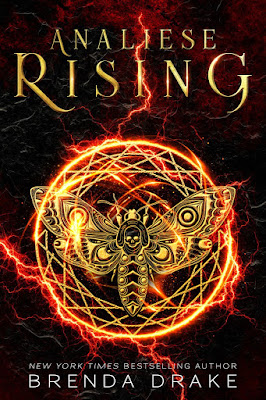 When a stranger gives Analiese Jordan a list of names before he dies, the last thing she expects to see is her own on it. Not. Cool. Her search for answers leads to the man’s grandson, Marek, who has dangerous secrets of his own. Both are determined to unlock the mystery of the list.

But the truth is deadly. Analiese is a descendant of the God of Death, known as a Riser, with the power to raise the dead and control them. Finding out she has hidden powers? Cool. Finding out she turns corpses into killers? No, thank you.

Now the trail plants her and Marek in the middle of a war between gods who apparently want to raise an army of the Risen, and Analiese must figure out how to save the world—from herself.

“You know,” Dalton says, pulling me out of my thoughts. “Technically, you have to do dishes for a month.”
I hug myself, trying to fend off the chilly spring breeze. “No, I don’t.”
“Yeah, you do. You threw down the glove before Freak Frog woke up.”
“Seriously?” I slide a look at him that says he better rethink his statement.
He flashes me the-hard-to-resist Dalton smile—all toothy and dimply. “Too soon?”
I’m not going to budge. He wants me to, but I’m not. That look of his isn’t going to win this time. I press my lips together but can’t stop the corners of my mouth from lifting and betraying me.
“I knew you weren’t mad at me.” He hops off the rock. “You want to get a latte?”
“Sure,” I say, giving in. Shaking my head, I let my smile win. It’s Dalton, after all. How could I stay mad? He’s all I have.
My thoughts turn in my head, and it’s as if I’m walking in a haze, ambling along the river beside Dalton. “The incident with the frog was no coincidence,” I say. “Not to mention the moths. How could someone even get that many? And why?”
Dalton wraps an arm around my shoulder. “Whoever set up that prank better hope I don’t find out who they are.”
“Even if it’s Rod?”
“Yes, even him.” 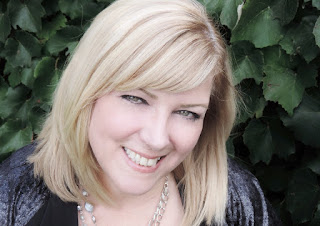 Brenda Drake grew up the youngest of three children, an Air Force brat, and the continual new kid at school. Her fondest memories growing up is of her eccentric, Irish grandmother's animated tales, which gave her a strong love for storytelling. So it was only fitting that she would choose to write stories with a bend toward the fantastical. When she's not writing or hanging out with her family, she haunts libraries, bookstores, and coffee shops, or reads someplace quiet and not at all exotic (much to her disappointment).