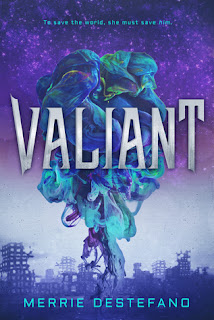 The Valiant was supposed to save us. Instead, it triggered the end of the world.
Earth is in shambles. Everyone, even the poorest among us, invested in the Valiant’s space mining mission in the hopes we’d be saved from ourselves. But the second the ship leaves Earth’s atmosphere, our fate is sealed. The alien invasion begins. They pour into cities around the world through time portals, possessing humans, forcing us to kill one another.
And for whatever reason, my brother is their number one target.
Now the fate of the world lies in the hands of me, a seventeen-year-old girl, but with the help of my best friend, Justin―who’s suddenly starting to feel like more―maybe if we save my brother, we can save us all…

Imagine your stuck on a time loop. You have one goal, to stop your brother from dying but if you knew what was going to happen would you also try and save a few others? Sara is given the chance to change history. She is visited by an alien who is again the invasion on Earth. He tells her what she needs to do but it isn’t easy. Sara wants to save the boy she has always had a crush on and her close friends. She has re-lived armageddon over and over. She has to find a way to save what’s most important. Every time the outcome turns out differently but Sara needs to work out how to change fate.
Earth needs help but reaching out has consequences. Now Aliens have invaded earth. They are killing people and Earth is being taken over. This book is in the horror genres but there is some romance. It’s about survival and is supposed to get you thinking about what you would do. It’s an interesting idea and I like the acknowledgement section so don’t skip it!
The ending leaves room for a second instalment. 4 stars out of 5. It’s quick paced and creative. The romance is sweet and the Earth take over is gory.
*I received an ARC in exchange for an honest review.
Posted by DanielleDuncan at 00:10