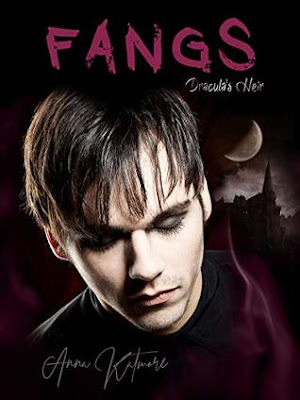 For nineteen years, I was just an ordinary Californian guy. Until a car crash almost killed me, and Count Dracula suddenly stuck his teeth into my throat. As his great-great-grandnephew and rightful heir, he ships me off to freaking Transylvania to learn how to be a vampire the hard way: with no staff to eat, no chance to escape, and no Wi-Fi. It’s just the place to go mental. And starve. But there’s this girl. Abigail… For some reason, she likes to roam the dark and musty castle. She claims to know nothing about vampires, but I swear she tries to kill me every damn time we meet. I would have invited her to be my dinner last night if she hadn’t fled with something very dear to me. My fang. Now, I’m waiting for sundown to find her and get my tooth back. And then I’ll kill the werewolf that howls in the forest, because that’s actually the one condition under which Uncle Vladimir allows me to return home.
But the wolf problem is harder to solve than expected. And Abigail’s cookie-like scent is making me do really stupid things…

Quentin is the last descendant of Dracula. He was saved from certain death and changed into a vampire. For 20 years he has been pampered and has become a poor excuse for a vampire. He doesn’t know mind control or even simple vampire tricks. He’s been feeding off the staff and taking the easy option. His uncle has had enough. Quentin is an embarrassment to the Dracula name. It’s time for him to stand on his own two feet and so he’s sent away to Dracula’s castle. The one without modern upgrades. No staff, no plug sockets and no comforts. It’s just a beautiful gothic castle located in Transylvania. In the castle, he finds a beautiful visitor. She smells nice and is his favourite blood type, but Quentin can’t even enjoy a quick snack. If he bites her she would tell the whole village. Quentin must learn how to be a vampire or how to persuade a human to like him. Fangs is a romance and also a mystery. There is a wolf that Quentin is supposed to deal with and the sun isn’t as big of a problem when it’s hidden behind beautiful scenery. This is light-hearted and a different take on vampires. Quentin is a sorry excuse for a vampire and does everything wrong. This is a modern tale in an old fashion setting. 4 stars out of 5. It’s something different. *I received an ARC in exchange for an honest review.