ACTING ON LOVE #Out Now #Review 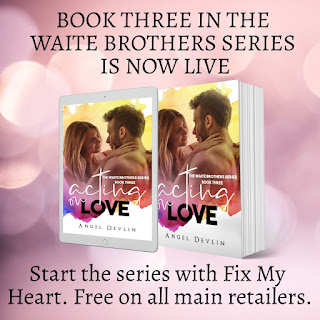 ACTING ON LOVE. BOOK THREE IN THE WAITE BROTHERS SERIES by Angel Devlin is OUT NOW!

Ezra Waite returns home from New York literally bringing the past back with him.
A successful actor, he's used to hiding behind masks: becoming the characters he plays.
Now he has no choice but to face reality—everything he's been avoiding is right here in front of him.

Lisa McKenzie's romantic history is filled with secrets, betrayal, and heartbreak; after a love affair so strong she thought it would destroy her.
Now, as the past unravels and reveals itself, she'll have to decide whether to act on love.
Or whether it's time to finally draw the curtain.

NEW TO THE SERIES? Start it for FREE with FIX MY HEART

The past and future collide to give Lisa and Ezra a chance at happy ever after. This is book three in the Waite family series. Throughout book one and two we know Ezra isn’t home a lot because of his career but that’s about to change.

After a house comes up for sale near his family he decides to buy it. He needs someone to look over it while he’s away. Lisa has always been reliable so she takes advantage.when he finally decides to live in the place he’s bought the past is ready for him to deal with.

Now Ezra is coming back to town can he sort his feelings for Lisa and explore what they could have?

This is a second chance romance. To correct the past sometimes you need to look forward.

The family integrate into this story however it could be read as a standalone. The scandals take a more serious tone and having family is a great support. This is about learning from past mistakes and final getting what you want.

Another great addition to the series.

Posted by DanielleDuncan at 06:07