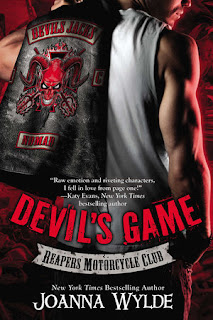 Liam aka hunter. Is part of the MC devil jacks. He is given the task of getting to know and seducing the princess of the MC reapers. He takes one look at Em and he is a goner. He has had a tough up bringing and the devil jacks helped him turn his life around. They gave him the task of Em but that isn't his reasons for wanting her. The clubs are walking a tight rope between peace and war. When the sh*t hits the fan his plan to have Em goes to pot but is he already too invested to let her go?

Em is the reapers princess. Her dad is the president of the club and the brothers look after her. They take such good care of her that the boys she dates are scared away. Em wants to meet a guy but the clubs protective streak is holding her back. She meets Liam online he seems nice and agrees to meet him but the internet is a scary place. You could be just talking to your worst enemy or maybe the MC's.

I enjoyed this book. It is intertwined with the last book so you already know part of the plot which was okay because you found out parts that you didn't already know. However for the first time ever I'm going to say I think this book was a little longer than it needed to be for that reason I'm giving it 4.5 stars out of 5

Posted by DanielleDuncan at 11:47