His Fated One by Anna Ring 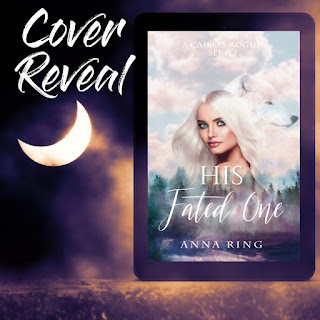 ➜ #CoverReveal for #AnnaRing with #PhoenixBookPromo➜ His Fated One by Anna Ring➜ Hosted by Phoenix Book Promo ➜ @byannaring @phoenixbookpromo➜ Buy Link:  https://books2read.com/u/mv167zBlurbAlek and Zia were your not so typical, rare, werewolf twins. Gifted extraordinary powers at birth to unlock when they shift, their life was headed on a righteous path as the Moons Warriors. But, a darkness had surrounded Zia, demons revealed themselves and in the face of death, Alek stole Zia away from their pack, becoming rogues to save her life. Now seventeen and nearly three years later, the siblings hopped from country to country, town to town before they were forced to go to school or face the consequences of being rogues. There, they meet their mates. Cairo, and Keiran, his best friend. Cairo runs the school, and when he finds out rogues have enrolled, he is not happy. Zia hides her scent, refusing to acknowledge Cairo as her mate. As tension rises between the two, they lock into a heated battle of wills. Just when Cairo thinks he couldn't hate her more, Zia is forced into battle, where her scent is released. Revealing herself to Cairo as his mate. What ensues is a tumultuous ride of highs and lows, both Zia and Cairo trying to figure out their bond, a jealous pack members interfering ways, and their childhood trauma. But when all seems well, the twins past comes back to haunt them in unforgivable ways. As Cairo's life is thrown into chaos, will he be able to save her in time? Or will she be lost forever?#AnnaRing #HisFatedOne #ShifterRomance #Author #NewRelease #CoverReveal #hotnewrelease #bookaddict #PhoenixBookPromo #indieauthor #authorsofIG #2022read #givemethebooks #coverlove #romance #ComingSoon #romancereads #tbr #teasergram #booklovers #romancereaders #bookrelease #bookboyfriend #bookworm #bookstagram