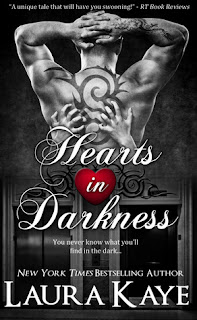 I was looking for another stranded on a desert island book because I was really in the mood for that kind of story so I searched the Goodread’s data base and came up with this category; Trapped/Stranded/Wilderness Romance Books. Hearts in Darkness rated number two and I knew I just had to read it. Okay so it is not a desert island instead it is set in a lift.


Makenna is having the day from hell. All she wants to do is go home open a bottle of wine and sit in front of the television. As she is leaving work she drops her phone and doesn’t realise the battery has fallen out as she steps into the lift. She is too wrapped up in herself to notice anything about the good Samaritan who holds the door for her.
Caden has just left a meeting in the building that Makenna works in. He doesn’t know her but notices her beautiful red hair. The lift has just set off down to the ground floor when the lights go out and the lift gets stuck! Caden doesn’t like enclosed spaces and needs to find a distraction.

These two strangers are in the wrong place at the right time. They need each other they just don’t know it yet. Fate throws them the ball they need in this sweet but hot romance novel.
I have to admit tragic pasts aren’t really my thing but in this book it worked. The lift adventure brings them together when they shut everyone else out. 4.5 stars out of 5.

This book was 99p on Amazon and totally worth it and better still now is the time to read it as the sequel is due out January 12th.