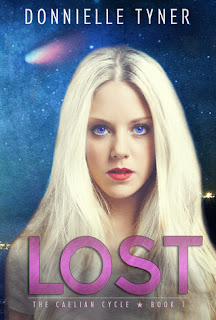 
This book was creative and a good start to a series of books. Lost is about an unordinary orphan girl called Sadie. She doesn’t know much about her family but she has managed to find her own alternative one, made up of other orphans.

The book is set 100 years after the world is exposed to radiation from a meteorite changing DNA of the people affected. The world is divided into two sets of humans, those affected and those who escaped exposure. The affected have gifts sort of like super powers.
Sadie hasn’t discovered her talent yet and is wondering if she will ever gain her skill. The key to unlocking her mystery lies with her past but maybe there is more to her orphanage origin than she thought.

I would recommend this book to fans of the girl in the box series. This book is a Solid 4 stars.

Posted by DanielleDuncan at 12:05