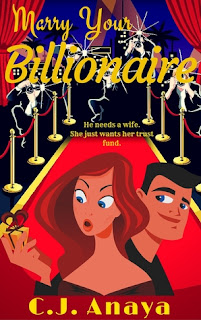 Book Review: ♥ ♥ ♥ ♥ ❣
This book was like watching a series of the the bachelorette. It had the good, the bad and the plain ugly cat fight. Marry your billionaire was pretty good. 4.5 stars out of 5.

Midge is a Hollywood producers daughter who has tried to move away from the crazy lifestyle but her father has other ideas. If she wants access to her trust fund she's going to have to do this small favour for him and step in the place of a dropped out candidate.

Brody needs to do some damage control to his playboy lifestyle. He signs up to do the tv series of marry me billionaire but soon realise he's made a mistake. He meets Midge just before the show starts and is already fascinated. She isn't interested in becoming his playboy of the month. The only way he is going to catch this fiery women is to get some time with her, hence the show being back on. The problem with this one is that there are 19 other women to stir the pot.

*I was given this book in exchange for an honest review* Thank you :)