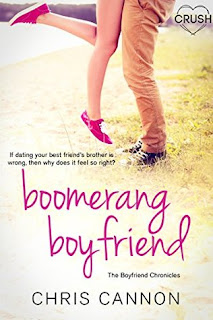 Delia is Jack's sisters best friend. She is always at Jacks house, and it feels like she is almost like family. He sees her as an annoying younger sister figure and has never thought of her as anything more. That is until she ends up getting a job at his work place, and they end up taking some art classes together. When his sister isn't by Delia side, he begins to notice her as more than an annoyance.

Delia's mum and dad work a lot. She finds herself hanging out with her best friends most of the time. Zoe, her best friend has a boyfriend, and Delia is interested in his friend, Aiden. They kissed once, and now she can't work out why he's been acting strangely. The more she tries to figure Aiden out the more she seems to notice Jack. She must be having a boy break-down because Jack is a jerk. He's not boyfriend material.

For the most part, I enjoyed reading this book. Both Jack and Delia are loveable. There were so funny parts in the book, and there was more to the story than just the two of them. However, there were certain parts of the story I found a little irritating.

Delia and Jack seem to start finding each other physically attractive rather than mentally. I know they have known each other a long time, but I felt Delia was just looking for a boyfriend rather than the perfect one.


The other love interest, Aiden was my least part of the story. Delia not dating him was a big part of this book, and I just didn't love it. I felt she could have been more supportive of his situation. I didn't like her obsessing over someone who was hot, and then cold.

3.5 stars out of 5. *ARC received in exchange for a fair review*

Posted by DanielleDuncan at 23:06