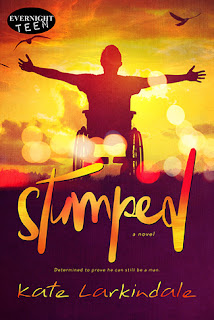 Comical read about Ozzy. A 17-year-old boy trying to lose his virginity. He has the hot girlfriend and the romantic setting. He just forgot the condoms, but that night changes everything. I don't mean his girlfriend got pregnant. Ow no, it's far worse at least in Ozzy's eyes. He's in an RTA and loses his legs. He's lucky to be alive, but he doesn't see it like that.

Ozzy is still a virgin and legless. His girlfriend is too materialistic, and can't cope with the changes. He's feeling sorry for himself and determined to have sex, whatever the cost. His adventure is crazy and people are mean. He has lost a sense of reality. He's forgotten that a random hook up has no loyalty or feelings to his situation. Along the way, he makes some friends and try's to find his place in his new world.

I think this book is supposed to be light-hearted about a dark topic. Ozzy feels different after he loses his legs, but the same rules apply. You find love and friendship through mutual understanding. It doesn't happen overnight. It's a sad story, but with crude language, and dark humour.

I enjoyed this book and couldn't put it down. I just wish it had been longer. This story had a lot of potentials that wasn't explored. The characters are interesting. The story kind of reminds me of American Pie but with the added element of disability. The ending is sad, but it wasn't the kind of book to make you cry.