Best friends Terra and Tiluk live alongside the wild orcas of Washington State. On the other side of the continent, Miles wallows in anger and self-pity fueled by his parents' divorce. In a moment of harrowing fate, their lives converge when Miles witnesses a captive orca brutally kill his trainer at a marine amusement park. When Miles contacts Terra and her family of whale biologists to better understand the "killer" whale, the three teens soon realize they are more linked to each other - and the whales - than they ever imagined. Driven by a primal urge to connect with the highly-evolved consciousness of the orca, the teens take extraordinary risks to challenge big business and renew lost traditions. Their journey is set to restore an ancient mystical bond between humans and whales that ultimately reveals The Blackfish Prophecy…a revelation about Terra - and those like her - that's about to change everything.

But this evening Claire was no peacemaker. She’d rung the bell. The bell was only for extreme emergencies. Yet when she’d gotten the call from a colleague in Florida about what had happened at OceanLand this morning, ringing the bell was her first response. With that phone call, all the years of hurt and frustration burst, and something broke inside her. She’d known even as she rang the bell that obviously this wasn’t a true emergency, but a part of her needed the tolling just the same. Something had to change. He’d killed again. Her heart cringed, thinking of him. She wiped her eyes, again.

Claire shivered inside her parka and glanced back at Terra and Tiluk, hand in hand as they descended the long set of stairs behind her and the other adults. She saw that Terra gingerly held the carved and blood‐soaked whale that she’d brought home, her fingers bandaged from the cut she’d given herself. Claire hadn’t been surprised to see Terra’s carving of the new calf. She knew her daughter felt a special kinship with Wendy’s new baby. She took a deep breath of the salted air she loved so much, reminding herself why she and her family were here. But her stomach remained tight with grief and empathy. Now, instead of having the chance to meet the new calf her daughter had dreamt about with a free and easy heart, the news of the killing shadowed everything. And even though she was a scientist, a world‐class researcher of the highest order, Claire had asked Terra to broadcast the Adagio on the two‐way. Just this once. With this latest killing, she felt an overwhelming need to ritualize her sorrow with the whales.

She looked at her husband Bill, taking in his salt‐and‐pepper windswept tousle of hair and etched face. His grim glance told her he felt as sick with the news and what it meant as she did. Looking back at Joseph and Maggie, she knew they felt it, too. Joseph reached out and clasped her shoulder for a moment, his eyes holding hers.

“Careful Claire,” Maggie said, eyeing the narrow, steep stairway. “Mercy, we don’t need any more injuries today,” she murmured. Claire stopped short, turned all the way around, and leaned into Maggie, hugging her briefly from the stair below.

Terra met Tiluk’s eyes, puzzled. What is really going on here? The adults said they’d explain about the Shantu news later, at dinner. Why was her mom so upset? Terra didn’t even know how to feel about what they’d told her. She was too dazed. The calf has a brother. The calf has a brother. Her mind, overwhelmed by this news—and the killing—had shut down. The words kept rolling around and around her head: The calf has a brother. But her brother killed a human. Her brother killed someone. It was all she could think of as if the news itself blocked her from considering its implications. Tiluk had grown even more solemn and quiet than usual. Neither Terra nor Tiluk were ready to know more. 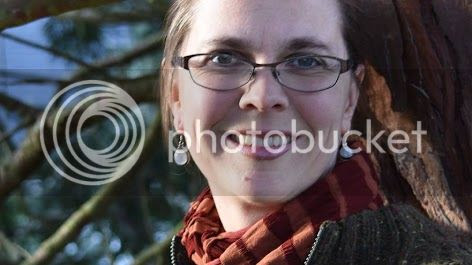 Rachel is a writer and biologist. As a kid she got hooked on all things animal, vegetable, and mineral. To complicate matters, she was hatching up stories before she could hold a crayon. Once she discovered biology it was all over. Ever since her first class in 7th grade when she refused to dissect a frog, a little voice in her head said: You gotta share this amazing stuff about how nature works, and ask if we really need to harm it. The little voice only got fiercer once she went to college and worked with captive dolphins and Beluga whales, then got to see wild killer whales only a few weeks later. From then on it was an all-out quest to convey the wonders of nature, while pointing out the serious problems of our very bad habit of dominating others and the Earth. She’s been a card-carrying science writer for twenty years. The Blackfish Prophecy is Rachel’s first book.