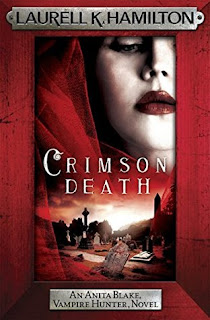 The Anita Blake books are one of my favourite series. I would recommend you start with book one. In 25 books we have come a long way.

Anita's best friend and partner in the hunt (Monster) has called for her help. Edward is in Ireland trying to solve a new disturbing case.

Apparently, vampire's don't exist in Ireland, but humans are getting bitten with no memory of what has happened. This part of the world holds its own magic, and an upset in the balance could be behind the new found problems.

Damian Anita's vampire servant is having his own melt down.
Vampires die at dawn but Damian's nightmares are keeping him awake. He has ties to Ireland, and Anita wants his help but only if he's willing.

This is a lengthy novel, and there is a lot going on. Like I said we are 25 books in now, and that means we have a lot of background characters to cover as well as the main ones.

Anita is back and ready to fly into action. This has everything you would expect from this series. Love, mystery, hot steamy scenes and a disturbing case with some kick ass supernatural scenes.

The pace of this one was a little slow but as always an enjoyable story with lots of action. It has an adventure to Ireland. The author try's to give a feel for the country, however, I wouldn't say it worked too well. Yes, they have meetings in the pub and church but that is pretty much as far as it goes.