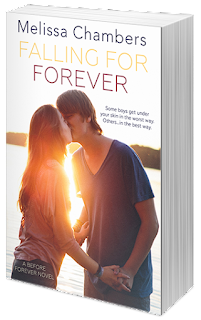 Falling for Forever (Before Forever #2)

The second Jenna Quigley turns eighteen, she’s headed to L.A. to extend the timer on her fifteen minutes of fame. Too bad her dad made her promise to graduate high school first. Silver lining? Her new school has a serious talent competition with a $25,000 cash prize, which would go a long way in L.A. Jenna’s got plenty of talent—she didn’t almost win America’s Newest Sensation for nothing. But it’ll take everything she’s got to bring down the music nerd with a stick up his butt…no matter how cute he is in those glasses.

Miles Cleveland needs to win that talent contest. When some hot girl stole his audition spot on America’s Newest Sensation, his chance to study music flounced off to New York with her. Now, not only can he win enough money to pay for his education, he can get revenge on that very same girl. He can’t start to question his plan, though…no matter how deep Jenna buries into his heart.

Falling for Forever is the second book in the Before Forever series. I'm in love with this series. Another 5-star worthy book! You can read this story as a standalone. However, this author's writing style is so addictive you won't want to miss The Summer Before Forever.

Jenna has dreams of being a star. She has had a taste of the limelight and she wants more. After reaching America's Newest Sensation's top ten, she is more than ready to pack her bags and head to LA. She may be about to turn 18, but that doesn't mean she is ready to leave her family behind. She is very close with her dad, and in his last attempt to hold onto her a little longer he offers her a new life-line.

Miles knows who Jenna is and is less than impressed with her. She is overconfident and he is happy to bring her down a peg or two.

These two are from different backgrounds. They are both bursting with talent but when they go head to head things are about to get complicated.

This isn't a love-hate relationship. It's just a little complicated.

I loved this book. I would happily read anything by this author, and I know I would like it. I'm addicted!!

I would recommend the Before Forever series to the 16+ (U.K) audience or the young at heart.

5 Stars out of 5. Thank you to Melissa Chambers, Chapter by Chapter Blog tours, and Netgalley for the opportunity to read this book in exchange for a fair review. 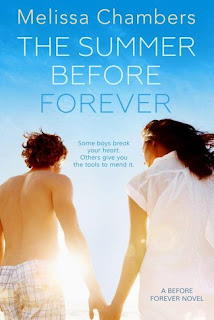 I really enjoyed this book. The writing style has an innocence to it but I would say it is suitable for the 16+ age group in which it is aimed at. A lot of characters in books these days seem to have an older feel of confidence to them but this one takes you back to the awkward teen years.

Chloe's dad has decided to re-marry giving him a new family and step-son. Chloe agrees to spend the summer with her new family with the understanding that her best friend will be there to help her enjoy a sun kissed beach summer.
Unfortunately just before she heads out for the vacation she gets into a sticky situation at home which leaves her lacking in social confidence. When she meets her future step-brother he is the perfect gentleman to help her over come her new fear. He is more than she ever could have imagined and they hit it off from the start, as the lines begin to blur she realises her feelings maybe less platonic and more lustful. Can she really have it all?

Landon has a secret of his own and his hardworking summer sounds less than fun but he has a good support system to help him through it. He welcomes Chloe as a distraction and realises there is more to life than avoiding the hard stuff.

This is a sweet step romance that ticks all the right boxes. 4.5 stars out of 5. I would recommend it to ages around 16 (uk) and those who are young at heart. This book offers a diverse look at teens struggle with accepting who you are and not caring about what others think.

Melissa Chambers writes contemporary novels for young, new, and actual adults. A Nashville native, she spends her days working in the music industry and her nights tapping away at her keyboard. While she’s slightly obsessed with alt rock, she leaves the guitar playing to her husband and kid. She never misses a chance to play a tennis match, listen to an audiobook, or eat a bowl of ice cream. (Rocky road, please!) She serves as the president elect for the Music City Romance Writers and is the author of The Summer Before Forever and Falling for Forever (Entangled Teen).

Question 1: I would love to know more about Jenna's audition for America's Newest Sensation she obviously nailed it. Can you walk us through it?


So funny you ask. :) In the first draft of this book, I had her recount her whole audition scene for her new friends.

As she’s waiting in line and watching the people in front of her go, she gauges the judges. This is their last group of the day, and they are exhausted and irritable, so she knows she’s got to kill it. She gets up there and sings an Ariana Grande song, trying hard to get the vocal just right. They are uninterested, to say the least. They thank her and scoot her along.

As she’s exiting the stage, it dawns on her that these judges are about her parents’ age, so they must be kids of the 80’s. She’s not really into 80’s music, but she and her aunt rehearsed this Go-Go’s song once for a karaoke performance, so she decides to break out with that. She takes ownership of the stage, moving around it but being careful not to be too into herself (which is tough for her). She makes it all about the judges, being sure to look like she’s having fun with them, not trying to impress them and be full of herself. She gets one yes, one no, and one maybe so. After working her charm one final time while they deliberated, she’s reluctantly let through. So she has some serious work ahead of her once she gets to New York. :)

Question 2: Jenna's parents are Bluegrass musicians. What does this entail for Jenna's childhood?


This was another part I had to cut! When Jenna was first born, her parents took her on the road with them. That didn’t work out well, especially for her already distant mother having to deal with a colicky baby on a bus. They came off the road and settled into studio work, and that’s when her mother moved from bluegrass to classical, playing with the symphony, and started distancing herself from Jenna and her dad. So her father had to take Jenna with him everywhere…to lessons he gave other kids, to the studio while he played on other artist’s albums. Jenna basically had to entertain herself…which may help explain why she’s a little self-absorbed.

Question 3: You grew up in Nashville. What does the place mean to you?


I’m proud to be a native Nashvillian! It’s such a great city to live in. It’s grown so much, it’s nearly unrecognizable from what I knew of it when I was little. Downtown used to be a ghost town with just a couple of honkytonks like Tootsies and Robert’s Western World. I used to go to those places in my early twenties and they were always half-empty. Now, downtown has exploded and the streets are closed to cars at nighttime. You can barely move on Broadway and 2nd Ave., much less inside those honkytonks! But I have great memories of feeding the ducks at Centennial Park, riding the Wabash Cannonball at Opryland, which is now Opry Mills—a shopping mall, and cruising West End Avenue on Saturday nights with my girlfriends in high school. Oh, man, this makes me want to turn back time!

Question 4: Chloe and Jenna are best friends. Linking book one and two. Can you give us a glimpse into the early days of their friendship?


Jenna is full of energy and personality, so she easily slipped in with the popular group at Cliff Ridge High when she first moved there. But she’s so quirky and individualistic, she very quickly found that their unwritten rules about conformity were not her style. So she glommed onto Chloe who was sort of in-between best friends (or really any close friends) at the time. Jenna just plopped down one day at lunch and started talking to Chloe like she’d known her forever, skipping the get-to-know-you small talk, which was exactly what Chloe needed. Jenna dragged Chloe to parties and Chloe made Jenna hang at home once in a while movie watching and music sharing. Their friendship reminds me a little of mine with one of my closest friends from high school. Jenna sort of walking on the edge and Chloe reigning her in. Extrovert and introvert. I was the Chloe in this friendship, by the way. :)

Question 5: Miles isn't the stereotypical guy who gets the girl, just like Chole isn't the type to date Jocks. I love these types of romances. What inspired you to write this series?


I love pairing odd couples. In The Summer Before Forever, Landon is a jock, which isn’t my favorite stereotype, but I wanted to show a different side of jocks than is typically portrayed. I loved the idea of a jock who went for a girl who was very opposite of him and who wasn’t a typical beauty. I don’t think Landon would have gone for Chloe if he hadn’t have been forced to get to know her like he did, which was exactly what I wanted readers to see.

With Falling for Forever, I had a bigger challenge with Jenna. She’s such a big personality, and so easily disinterested and distracted, that I knew I needed to find a strong guy to match her. But for her to really fall for him, it needed to be a smart guy…an impressive guy, but one who had some quirk to mirror her own. So I thought, how about a nerd? I had a lot of fun with Miles. I wouldn’t exactly call him a beta because he can alpha up whenever he needs to, but I liked playing with a male character who isn’t all testosterone all the time.


Oh, really?! That is so good to hear. Greta was an unexpected breakout character for me. She sort of held my hand and led me where her story needed to go. It was hard to rein myself in with her! I wanted her to have her happily ever after. Maybe someday?

I’d also like to write Shane’s story. I think he’s sort of swoony, but he’s got issues that need resolving. And I’ve never been able to get Monica from book one out of my head. I’m not sure which one of these, if any, will come to fruition, but if they do, I’ll be sure to keep you posted!

Thank you so much for such fun and interesting questions! I had a ball!

Posted by DanielleDuncan at 22:44