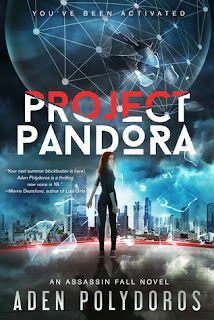 Book Review: ♥ ♥ ♥ Please read the interview if you are interested in this book. I think some background information to Project Pandora/Aden Polydoros would be useful to understand if this book is for you.

Project Pandora wasn't what I expected. It reminded me of a mixture of Kyle XY and Blindspot (Both starring Jaimie Alexander). I would say its unique and a little outside the box. I haven't read anything like it before, and I feel the synopsis of the book doesn't do it justice.


Project Pandora is a mystery, suspense novel with romance mixed in. It has violence and action throughout and is set-up to leave you wanting more. Project Pandora is just the beginning.
I would recommend reading a sample of this book before deciding if it is for you.


Tyler Bennett has trust issues. He is a foster child who moved around a lot. Now he is beginning to lose himself. He can't remember how he got his injuries or what he did the night before. He is questioning himself never mind others.


Shannon has a thing for Tyler but could they be closer than they realise already? They are drawn to each other but learning their secrets could get them both killed. Pandora's box should never be opened. Not even to take a little peek. If you haven't guessed Project Pandora contains Greek mythology.


This book is written as a story but also contains case notes. It's dark, especially for a teen read. For the right audience, this is going to knock your socks off, however, unfortunately, this book wasn't for me.

Tyler Bennett trusts no one. Just another foster kid bounced from home to home, he’s learned that lesson the hard way. Cue world’s tiniest violin. But when strange things start happening—waking up with bloody knuckles and no memory of the night before or the burner phone he can’t let out of his sight— Tyler starts to wonder if he can even trust himself.

Even stranger, the girl he’s falling for has a burner phone just like his. Finding out what’s really happening only leads to more questions…questions that could get them both killed. It’s not like someone’s kidnapping teens lost in the system and brainwashing them to be assassins or anything, right? And what happens to rogue assets who defy control?

In a race against the clock, they’ll have to uncover the truth behind Project Pandora and take it down—before they’re reactivated. Good thing the program spent millions training them to kick ass...

Question One; what was your inspiration behind Project Pandora?


The inspirations for Project Pandora came from Project MKULTRA, the experiments performed by Dr. Donald Ewen Cameron, and the eugenics movement. The Bourne Identity movie was also an influence.


Question two; Project Pandora is your debut novel. It has an underlying theme of Greek mythology which we all know is a mixture of good and evil. Is this a subject you have a special interest in?


Greek mythology is definitely an interest of mine. Mythology in general has always fascinated me, but Greek mythology has a special place in my heart because my dad's side of the family is Greek. Right now, I'm reading up on Egyptian and Slavic mythology for two other stories (unrelated to Project Pandora) I'm playing around with.


Question three; The book has a darker side to it than most teen reads. Was this your intention from the start?


Yes and no. The first scene I wrote in this story was the first chapter, which takes place from Tyler's point of view as he performs an assassination. I knew from the beginning that it would be a dark, gritty story. I just didn't plan for it to end up as dark as it did.

I began writing it when I was eighteen, so I wasn't much older than the protagonists in the story. I was going through a rough spot then and used writing as a way to channel my emotions, so a lot of that can be seen in my characters' personalities. Tyler got my depression, Elizabeth and Shannon got my doubt and anxiety. Hades got my existential crisis, sort of. It was nice to create a book about characters suffering from anxiety and depression that didn't focus on their mental illnesses.


Question four; Did the book turn out the way you expected?

No. Hades was originally going to be a minor character with only a few chapters from his point of view. I planned to make him the antagonist and an irredeemable jerk. Instead, he turned out more morally ambiguous than I intended, and in the process of edits, became my favorite character. Needless to say, he also upped the story's body count a fair amount...


Question five; Project Pandora is just the start of this series do you already have something in the pipeline for the next installment?

I have written the sequel and an accompanying novella. The novella will mainly focus on Hades's backstory, since his past influences his behavior more than with other characters.

Thank you so much for answering my questions Aden Polydoros and I hope this helps readers.


*I recieved an ARC of this book in exchange for an honest review*. Happy reading everyone :)

Posted by DanielleDuncan at 06:07