Bridges Burned (Going Down in Flames #2) by Chris Cannon 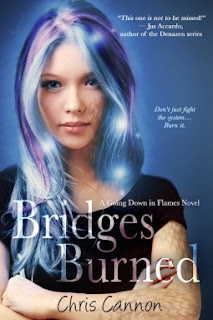 Bridges Burned (Going Down in Flames #2)


Don't just fight the system…burn it.

Since discovering she is a shape-shifting, fire-breathing dragon on her sixteenth birthday (surprise!), Bryn McKenna’s world has been thrown into chaos. Being a “crossbreed”—part Red dragon and part Blue—means Bryn will never fit in. Not with dragon society. Not with the archaic and controlling Directorate. And definitely not when she has striped hair and a not-so-popular affection for rule-breaking…

But sneaking around with her secret boyfriend, Zavien, gets a whole lot harder when he’s betrothed to someone else. Someone who isn't a mixed breed and totally forbidden. And for an added complication, it turns out Bryn’s former archnemesis Jaxon Westgate isn’t quite the evil asshat she thought. Now she’s caught between her desire to fit in and a need to set things on fire. Literally.

Because if Bryn can’t adapt to the status quo…well, then maybe it’s time for her to change it.
Kindle Edition, 312 pages
Published January 19th 2015 by Entangled Teen
Amazon UK
Amazon US

I'm being a rebel and reading this series out of order. I wouldn't recommend this but I like the fact I know who's important and who to snub. Bridges Burned is the second book in the Going down in flames series and I liked it more than the first one. Bryn's future as part of the dragon community is beginning to fall into place but her love life is up in the air.

Bryn is dating Zavien who is promised to someone else. Zavien was Bryn's mystery guide in book one. He's the rebel bad boy but not the knight in shining armour. As we see this story unfold we see Zavien isn't the person Bryn expected. Luckily she has a good network of friends and family. There is trouble amongst the dragons once again and nobody is safe.

This is a condition story of Bryn's life as a dragon shifter.

(I read book One and Five before joining the blog tour).