Birth of the Bacchae Tour and Giveaway

"Vampires, Immortals, Bacchae—they’re all the same. The name may change, but their appetites never do."

Ever since archaeology student Serafina Finch found an ancient Roman amulet on a dig in Italy, she's been having dreams. Strange dreams that leave her with an eerie sense of foreboding. But between a busy college schedule and a boyfriend she's hoping to marry, she doesn't have time for strange.

Then a mysterious cult takes an obsessive interest in the artifact. Serafina finds her life in chaos as she's thrown into the supernatural world, where Immortals and witches alike claim ownership of the amulet. Her amulet.

As her connection to the amulet grows, she discovers a dark secret about her past. Serafina realizes she must protect the powerful relic at all costs--even if it means losing one of the people she loves most.

“Invisible. Powerful. Immortal. We are Bacchae.”

BIRTH OF THE BACCHAE is a New Adult Urban Fantasy novel exploring the origins of vampire lore in a modern setting. Where do the stories come from? How were vampires created? Do they still exist today? 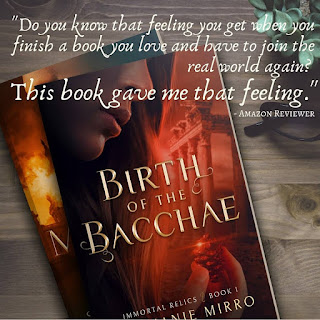 Lorenzo narrowed his eyes and leaned forward. An aging, musty scent wafted off of the older man, along with a thick layer of cologne.
“Do not play games with me, girl. You will not like losing.” His face contorted with a snarl and his eyes flashed red, as if he suddenly wore a hideous mask. It was startlingly familiar, like how Octavia looked during her late night visit to her sister.
Sera jumped back, the arm of the couch stopping her from going any further. “What the hell was that?”
The sound of fabric ripping filled the air as his nails dug into the couch. He growled, low and menacing.
“I’m-I’m not playing games,” she managed to stutter as she cowered before him. “I assumed you had stolen it.”
Did his eyes really just do that? Are the dreams driving me crazy?
Lorenzo stared at her, his eyes red-rimmed and burning. He flew to his feet before she could blink and confronted Solomon. “Why did you bring her to me? Did you not think to check before you wasted my time?” he yelled up at Solomon’s face.
“FIND IT!” He upended the conference table, chairs flying in all directions as he stormed his way out of the room, not waiting for a response. His howls of frustration echoed down the hall.


Sera stared with wide eyes at the table, a solid oak table that must have weighed several hundred pounds.

Stephanie Mirro's lifelong love of ancient mythology led to majoring in the Classics in college, which wasn't quite as much fun as writing her own mythology stories as she did as a child. But that education, combined with an overactive imagination and being an avid fantasy reader, resulted in a writing career.

Starting her days with coffee and ending them with wine means Stephanie can usually be found juggling household chores, keeping the kids alive, and trying to write, edit, publish, and market the stories that haunt her dreams.