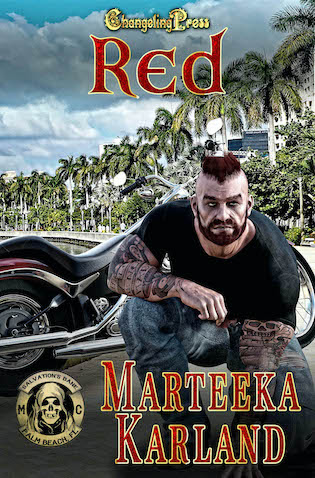 I should send her far away from me. But one kiss and I know shes mine. Ill kill to protect her.

Rosanna: Salvations Banes been good to me — more of a family than Ive ever had before. And I want that. But Im not a kid any more, and I know what I want. Red. I need him to see me as more than just another mechanic. No matter how good I am, working beside the man is never going to be enough. Im going to break him down. Get under his skin, until he realizes Im a grown ass woman, and I know my mind. And if that bitch of an ex wife of his doesnt leave us alone, shes the next thing Im gonna break.

Red: Im headed for a special hell. Rosanna knows her way around cars, Ill give her that, and she looks sexy as hell with a wrench in her hands and a spot of grease on her nose, but shes just a kid. I know shes got a past she cant or wont talk about, and she may think shes all grown up, but shes younger than my son, Anthony. Pretty sure that makes me some kind of a pervert. And now that Anthonys the assistant DA, hes got a bee up his ass to take me down. Be damned if Ill let him take Rosanna with me. I should send her far away from me and this life, but one kiss is all it takes to pull me under. I could no more give her up than I could give up the air that I breathe. Id kill to protect her. And from the looks of things, I may have to.

Get the lead out, boys,” Red gruffed to the dozen or so men in the garage he owned. We got less than forty-eight hours to deliver these two cars and I still need to go over them to make sure you fucks didnt miss anything.”

One guy just flipped him the bird without looking up from under the hood of the car he was working on.

Lazy as you fuckers are, if I let it slide once, youll fuck me over the next time and its my ass in trouble with Thorn.” Red tried not to grin, but it was hard. He worked with good men and loved every one of them like a son. At least, he loved them like he wanted to love his own son. That ship had sailed, though.

I can help if you need me.”

The groan came before Red could repress it. No,” was all he said.

Her name was Rosanna Creamer, and the image her name presented just… stuck. Because, seriously, he could envision her creaming on his cock for hours and hours. Every day. Forever. She was also so young any thoughts he had about her were probably illegal. If not, they should be. He was forty-eight years old. Rosanna said she was twenty-three, but he had his doubts.

The disappointed look on her face got to him every time. He wanted to call her back and give her a job to do, but if he did, the kid would walk all over him.

Fine. But Im ten times better than any of those fuckers,” she muttered.

No swearing.” He said it automatically, like he might scold a naughty child. The second he did, he winced.

Fucking fine, motherfucker,” she shot back. There was venom in her voice, but Red didnt mind. His head whipped around almost of its own accord to watch her stomp away. Because, really, she had an ass to make angels weep. When she hit this level of angry, she always flounced off with that little ass jiggling like his hand might make it jiggle if hed smacked it. Sure enough… yeah. There she went. And just like that, his cock was at full attention.

Fuck,” he muttered, rubbing his hand over his mouth.

And dont think I dont know youre looking at my ass,” she shot back over her shoulder. Then, just to torment him, she flashed him a cocky grin and bent over at the waist to pick up a wrench from the garage floor where some dumb fuck had left it.

He turned away from her. Had to. Otherwise, hed have her bent over the hood of the GTO she was working on. 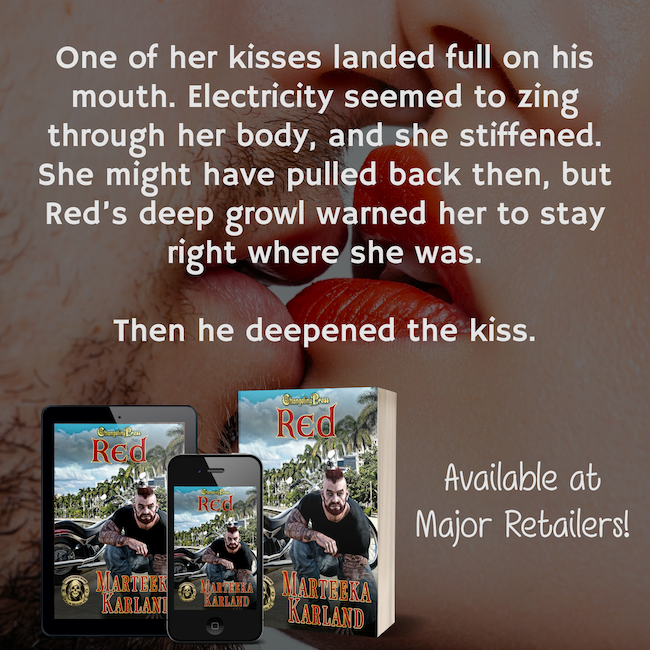 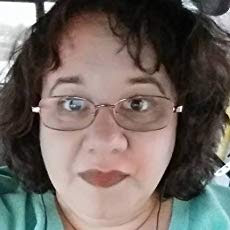 Romance author by night, emergency room tech/clerk by day, Marteeka Karland works really hard to drive everyone in her life completely and totally nuts. She has been creating stories from her warped imagination since she was in the third grade. Her love of writing blossomed throughout her teenage years until it developed into the totally unorthodox and irreverent style her English teachers tried so hard to rid her of. Now, she breathes life into faeries, space hunters, werewolves, vampires, shapeshifters, and a few just plane ole ordinary people. She loves to see the awkward, self-conscious band geek get the captain of the football team and make him beg for it.

Posted by DanielleDuncan at 12:39