Blame It on the Bet 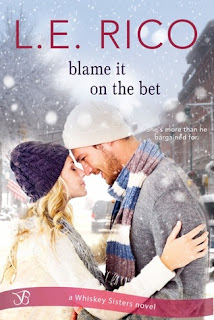 Blame It on the Bet (Whiskey Sisters #1)

Blame It on the Bet wasn't what I expected, and I think that is why it took me a bit of time to get into the book. The story its self is really good and the book sets-up a town, which is loveable. This is a standalone novel. However, is the first in the series about The Whiskey sisters.

Hennessy O’Halloran moved away from home to pursue her career. Unfortunately, her father has just died, and she has returned to her home town to help her family. Her father wanted to give his daughters everything he could, which led to expensive loans. At the heart of the family is the pub the sisters hold dear, and now they have to fight to save it. Hennessy hadn't realised how much she had given up for her career, and now is getting an insight into what living close to her family could mean.

Bryan Truitt life is his career. He literally sleeps at his desk. When one of his projects isn't turning out the way he would have liked he decides to get hands on and find the source of the problem. What he discovers is a town that is more than he expected, and the key to unlocking his cold heart.

There isn't much humour in this book, and I realised after that I kind of expect at least a bit of sass/wit in my romances reads. In this book, humor isn't needed, and I think it wouldn't benefit the story. Bryan is a complex charter who closed off this heart a long time ago. His job needs him to keep his head in the game. Hennessy has just lost her father and needs to find some money fast. These situations aren't really funny.

As for the bet (the title). It wasn't really a big aspect of this story.

I would say if you are looking for a story with depth over comedy this one is for you.

4 stars out of 5.
*ARC received in exchange for a fair review*