A Grand Old Time: An uplifting, feelgood comedy that proves it’s never too late to have the time of your life 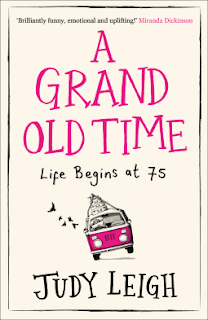 A Grand Old Time: An uplifting, feelgood comedy that proves it’s never too late to have the time of your life

Evie is bored with her life. She lives in a care home, Sheldon lodge. Every day is the same. She wants some excitement. She doesn't want to live the life everyone expects. It's dull and too predictable.

From Ireland to Liverpool and beyond. A little winning can go a long way. She meets some interesting characters and finds a second life.

Evie's son Brendan loves his mother. His life has also become something he didn't expect. His wife doesn't look at him the way she once did. Their lives are too routine. Evie is about to shake things up for them too. Evie has run off from the care home and Brendan has to track her down. A road trip across countries is in order. Brendan and his wife need a getaway this just wasn't what they had in mind.

At 75 life doesn't have to be predictable. Live life to the full and enjoy your self. A Grand Old Time wasn't quite the read I expected but it was an okay read. Evie is unpredictable and a risk taker. She has her son chasing her. It's what he needs he just doesn't know it at the time.

This book is for the rebellion at heart. Evie wasn't really my cup of tea and I would recommend you start with a sample of this books first. Evie isn't really a book reader :s. She also didn't start with a plan. I felt she was a little too naive and this story quite easily could have ended in disaster.

Paperback, 368 pages
Expected publication: May 3rd 2018 by Avon
Posted by DanielleDuncan at 03:43