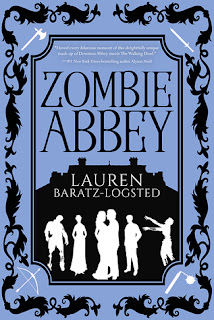 
Lady Grace, lost in the middle and wishing she were braver.


Lady Lizzy, so endlessly sunny, it’s easy to underestimate her.


Upstairs! Downstairs! Toss in some farmers and villagers!


None of them ever expected to work together for any reason.


But none of them had ever seen anything like this. 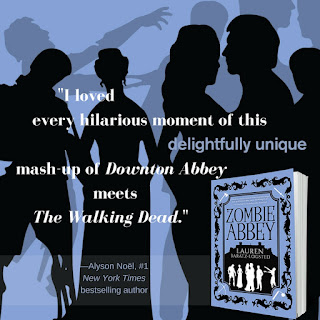 Dr. Webb was lurching toward the church out of the mist, something terribly off about his halting gait. More specifically, he was lurching toward Mr. Young.
“Are you all right, Dr. Webb?” Mr. Young called, the former joy in his voice replaced now with concern for the other man.
“Merry!” Lady Grace called out a warning. “Don’t go any farther!”
“But can’t you all see?” Mr. Young said, still walking forward. “Poor Dr. Webb is sick.”
Yes, Dr. Webb was sick. His clothing and general appearance were all disheveled. And he smelled bad, too, the duke realized, as a rotting stench made its way to his nostrils, which flared in response. Why, the smell was similar to that which had enveloped the dead valet, his dead valet, yesterday. Perhaps Dr. Webb had acquired the wretched smell while tending to some poor person in the village?
Dr. Webb still lurched, his arms spreading out now as Mr. Young approached. 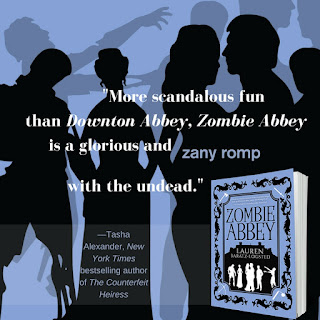 “Merry, please!” Lady Grace cried. Then she moved to step forward herself, no doubt to try to stop Mr. Young, but Benedict Clarke held her back, catching her with one arm around the waist.
And now Mr. Young was opening his arms wide, too, as though to warmly greet the returning doctor, but when their bodies met and the doctor embraced him, he immediately began to chew on the closest part of Mr. Young’s body that was available to him, which, in this case, happened to be his upper arm.
The duke watched, frozen in horror as no doubt the others were, too, as the doctor chewed through Mr. Young’s jacket and shirt, straight down to the flesh beneath. It might have been almost comical, were it not so downright horrifying.
Among the things you never expect to see in life: one human being attempting to feed on another like an animal. 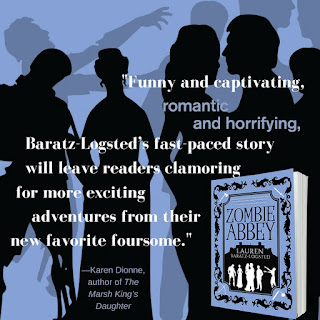 
Zombie Abbey is the first book of this kind I've read. I know there are quite a lot of this kind of books out there and I was curious. I didn't know what to expect and once I signed up I'll admit I was a little scared to read it.

Porthampton Abbey has similarities to Downtown Abbey. The wealthy family with 3 female daughters; Lizzy, Grace and Kate. A well-orchestrated staff with a butler, footmen, maids and even a cat. The cast is quirky and fitting to the times.

Katherine Clarke is the eldest sister of 3. She needs to marry well if she wants to continue enjoying the finer things in life. The upstairs story is set and we are straight into hearing about a strange death in the village. The hot stable boy's uncle was the deceased. Will Harvey has always had a set place at Porthampton Abbey. He may be handsome, but not good enough for a Lady. Kate is taught to stay away from him even though she would like to know him better. 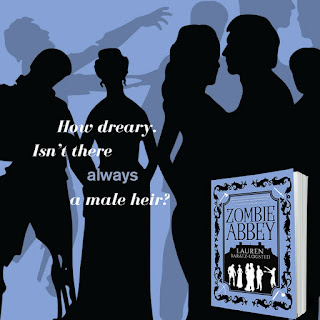 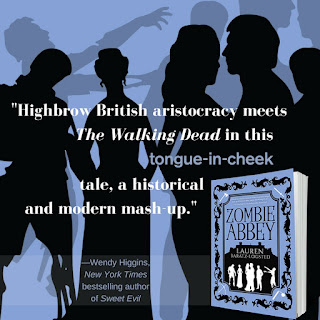 Meanwhile downstairs Fanny Rogers is preparing the house for the day. She has many tasks, but her mind is set firmly on the gossip. What a strange death.

Lizzy wants to marry for love. She isn't interested in entertaining the suitors her father has invited to the house for Katherine. Grace is her total opposite and desperate to impress. They are all different and they all need to get their priorities in order before it's too late. People are dropping dead, but it's the living who may lose their life.

This had a good historical story. The upper class too snobby to see what is in front of them and the lower class having big dreams. The zombie element gives the story a spooky, but comical twist. It weaned out the brave, the stupid and the downright crazy.

4 stars out of 5. *I received an ARC in exchange for an honest review. 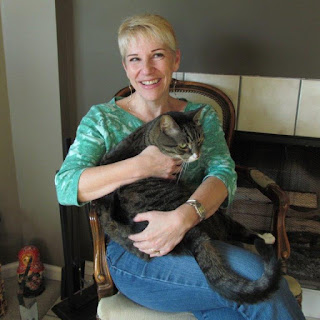 About Lauren Baratz-Logsted:
Lauren Baratz-Logsted is the author of over 30 books for adults (Vertigo), teens (The Twin’s Daughter) and children (The Sisters 8 series which she created with her husband and daughter). She’d love to dress up in period costume from the 1920s but she’d be a lot less excited about meeting zombies. Lauren lives in Danbury, CT, with her husband and daughter and cat, all of whom are writers (well, maybe not the cat).