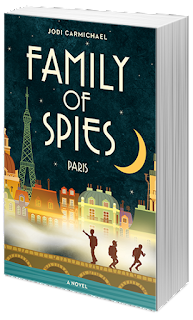 When cousins Ford, Ellie and Gavin, discover their great-grandfather was a rogue World War 2 spymaster, they must outrun MI6 and the CIA through the streets of Paris, relying on their wits and Ford’s newfound clairvoyant skills to unlock Great-Granddad’s spy secrets buried in the past. Great-Granddad hid something important to the war effort and these agencies want it back! 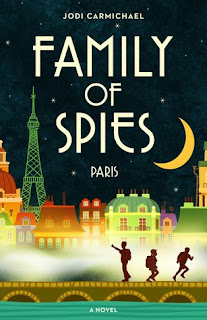 A family mystery unravelled with a touch of magic. Ford is on his summer holidays with his family. He feels everyone has their own special gift except himself. Gavin is super smart and Ellie is pretty brainy too. They have great hobbies and even speak better French. He wants to find his thing, little does he know, Ford is pretty unique. As the annual MacKenzie- Whitaker family trip begins the group are going to discover a family secret which will make the holiday even more thrilling.

Their Great-grandfather was a spy during the Second World War. Ford finds some old pictures and gets a glimpse into the past. Ford's special gift is to see more than the photograph. Now the family are getting more than they bargained for and an adventure around Paris.

The idea of Family of Spies is really creative and the story is a great adventure. 4 stars out of 5.

*I received an ARC in exchange for an honest review as part of the Chapter by Chapter blog tour. 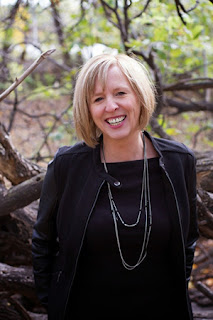 Jodi Carmichael’s dreams of becoming an author began to come true when she attended her first SCBWI conference in Los Angeles in 2007 and was nominated for the Sue Alexander Most Promising New Work Award. A champion for the underdog and kids who think differently, she wrote SPAGHETTI IS NOT A FINGER FOOD AND OTHER LIFE LESSONS (2013) which won numerous awards including a Gold Mom’s Choice and a Silver Moonbeam in 2013. In 2016 her novel about relationship abuse, FOREVER JULIA (2016) won the Manitoba Book Award; The McNally Robinson Books for Young People Awards - Older Category and received a Bronze Moonbeam Award for Young Adult Fiction - Mature Issues.

When not channeling characters from her books, she can be found strolling Manitoba beaches with her husband, two daughters, and exceedingly scruffy Border Terrier named Zoe..