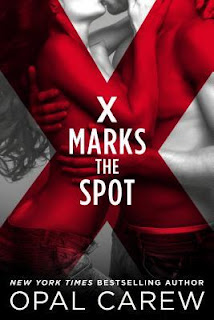 Abi has been in love with Del for years, but they never got around to acting on their mutual attraction. And then she met and married his best friend, Liam.

But when Abi and Liam's marriage falls apart, Abi decides to take control of her life and find her happily-ever-after with Del. So when they're all staying in a country inn for her brother's wedding, Abi decides to slip into Del's bed and seduce him...except she accidentally ends up in Liam's instead.

Liam never stopped loving Abi, and he plans to use every blazing hot trick in his book to keep her in his bed...even if it means sharing her with Del.

X Marks the Spot is emotional, sexy, and is Opal Carew at her best!

I love taboo romance novels but this one went too far. It was messed up with a capital F. The sexy scenes were hot but not enough to save the book. I wanted Liam to get his wife back... if he wanted her. I've read a few of Opal Carew's books and have enjoyed them but I'm sorry this one is a no from me.

Abi has a close network of friends who are entangled with her family. She married one, Liam but should have held out for Del. A wedding brings these three together. Abi sleeps with her husband and Del says he's willing to give there romance a chance. Abi can't keep her legs closed. She gets pregnant by her husband. Liam has always wanted a baby with his wife but she wants to be with Del. It's so F***'d up.

Scandal, drama and a lot of sex.

You'll either hate it or love it. The ending makes sense and has a happy ever after.

2 stars out of 5. I received an ARC in exchange for an honest review.