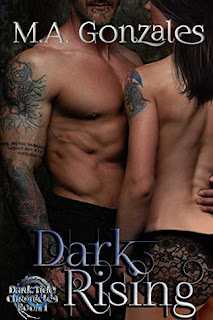 Disappearing fifteen years ago after the death of her best friend Micah, Elora has returned to Devils Falls a supernatural community hidden deep in the heart of Phoenix. Someone is after her, and they know her habits. Her return to L.A brings her back in contact with Greyson Black, Micah's oldest brother. The dark, commanding, alpha Limikkin wore power like a cloak, and she responded to it. Not like she’d ever admit it.The last person Greyson expected to sweep back into his life was the woman who had walked away after his brother died. Best friend to his brother, and engaged to a male who would never know her worth, she was the one woman he couldn't have. He wanted her badly, and it nearly consumed him. Someone is after her and she needs his help. Adding to Elora’s situation, someone is killing people in his club and threatening to expose them to humans.The more time they spend together the more out of control their passion for each other blazes threatening to explode, or tie them together forever. For the first time in his life, he can see a future with one woman and one woman only. He'll do everything in his power to convince her they're meant to be.A familiar enemy arises threatening Elora's life and everything Greyson holds dear. In order to survive she must trust the one man who has the power to shatter her heart. Is she willing to risk everything for the only man she has ever really loved or will she let a painful past dictate her future?Warning: Explicit love scenes, naughty language, and overwhelming, sexy as hell, alpha males. Intended for mature audiences. 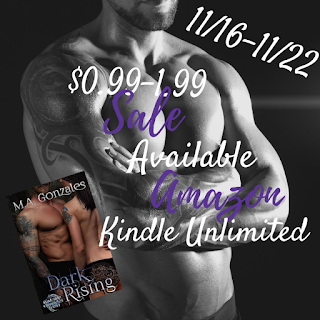 Dark Rising is the start of a new vampire series available for Kindle Unlimited readers. It has a fresh outlook on the supernatural and a mystery to solve. Our main character is Elora. She's had a messy relationship history and someone is out to catch her (In a non-romantic way). She is a vampire with a special gift. She can talk to ghosts and luckily she gets a warning before the bad guys turn up. Now Elora needs to find out who they are and what they want. She finds herself getting sucked back into the life she left behind.

Greyson has hidden his feelings from Elora for a long time. She thinks he hates her but the truth is he struggles to resist her. His brother Micah was her best friend and he watched her date the wrong guy. He now finds her on his doorstep in need of some information linking Greyson to murders. The pair must work together to get some answers and this time Greyson isn't going to let her slip away.

This was different and I enjoyed it. It has some steamy scenes and a refreshing storyline. It's the start of a series and does leave the door open. 4.5 stars out of 5.

Posted by DanielleDuncan at 23:12