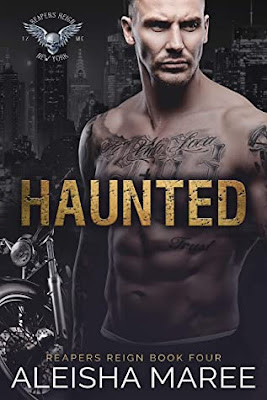 by
Aleisha Maree
We met in a nightmare that was my life.
Craving.
Longing.
Needing.
Fighting.
The in-between world where time was my enemy and it held so much power over me.
A hypnotic glaze of fire and ice.
We met. We stared into each other’s eyes. We knew. We felt. We were destined to be.
But my world was on fire. An inferno, a hell so hot even the devil stepped back.
She was hiding in the dark that I breathed in. Lived in. Bathed in.
The nightmares became our home as our silent world spoke loud to each other.
Ghosts that never left us become louder and more present as we tried to entwine together.
Confusion.
Battles.
Hearts.
Minds.
Love
Become more than a fantasy as we fell and fell hard.
Fleeting seconds of nightmares became alive in moments where happy could live.
But then we woke up.
Goodreads | Amazon UK | Amazon US
MY REVIEW 4*
Haunted is my first book by this author. Its a gritty MC romance. It does come with a trigger warning so I knew to expect something dark. The pair have a haunted past but can they find a way forward?

This book is available on kindle unlimited.
Posted by DanielleDuncan at 04:00