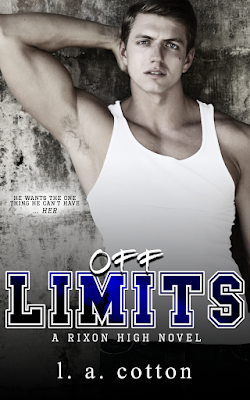 Here it is, the cover for Off-Limits, the first book in L A Cotton's brand new Rixon High series, coming March 30

But it’s senior year, and she wants nothing more than to try and push her boundaries and embrace the last year of high school.

But now he finds himself in enemy territory forced to prove himself to his new coach and teammates.

It starts with a dare. Seven minutes of heaven in a boat shed. But it quickly turns into something neither of them saw coming.

He’s everything she should resist.

She’s everything he shouldn’t want.

But neither of them are willing to walk away because together, their demons seem that little bit easier to silence.

There’s just one problem ... Lily is the coach’s daughter.

Posted by DanielleDuncan at 11:21