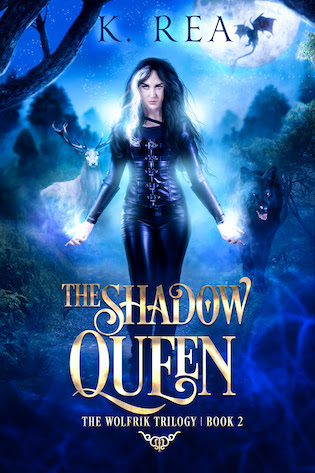 A SMOLDERING COURT.
A DIVIDED PEOPLE.
A WARNING FROM THE GODDESS.

With the Court of Shadows in ruins, Evelyn Wolfrik has one goal – to rebuild.
After an encounter with the God of the Forest himself and a summons from the Court of Light, Evelyn’s future seems anything but certain.

Leaving the forests, her pack, and fledgling Court behind, Evelyn travels to the white mountains of the Court of Light. Deep in the mountains, navigating not only a frigid court but also challenges and trials she never could have foreseen, she risks losing more than just her crown.

Gryphons in the Night

I snuck up the mountainside as quickly and quietly as I could. The rocks beneath my feet slid, the goats noticed. The ones awake went on alert as I ran towards them, weaving through the coverage. They darted. The sleepy one, though, was slow. Its instincts kicked in, and it ran for open ground away from me. I herded it up the mountainside to the snow in its panic. It floundered in the snow as I stalked it. The goat recognized me as a predator; its bleats became screeches on the wind as I lunged.

With the goat’s neck in my jaws, the screeches I heard grew louder, to an unbearable volume. I snapped the goat’s neck as a roar erupted around me, and the screech kept going. They did not belong to the goat. I pulled my prey free from the snow and ran with it down the mountain to a boulder I had seen earlier.

A shadow crossed over me as a gryphon collided with Ares; both creatures were engulfed in Ares’s cloud of flame. Training in the woods, watching Aiden and Ares tussle, did nothing to prepare me for the violence I now witnessed. The goat carcass slowed me down, but we needed the food, and I knew I needed to get out of Ares ’way. I’d only be a distraction on the ground. A second shadow passed over me, more screeches echoed through the mountain. I reached the boulder and dropped the damned goat in the shadow of the large stone before peeking back around the rock.

There in the fading light, Ares fought in his dragon form, swooping and diving between two gryphons. Their lion bodies were dark, like their avian heads and wings, a silhouette against the darkening sky. Their beaks were sharp and screeching, yet Ares didn’t hesitate or run. He maneuvered around them as if it was all a choreographed dance; to him, maybe it was. The ribbon of light from the protective barrier grew brighter in the growing darkness.

A rake of Ares ’claws along the gryphon rendered its wings useless. As it fell from the sky, its cries rattled the mountains. It was disorienting enough that Ares did not focus back on the other gryphon until it was too late. As if time had stopped, I watched, frozen, as the gryphon launched itself at Ares ’back and ripped his wings to shreds in the same fashion Ares had done to his companion. Ares’s roar of anguish struck a chord deep in my soul. Still in my wolf form, I scrambled to the top of the boulder, and I launched myself into the air. 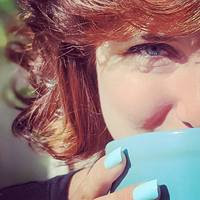 K. Rea is a part-time romance writer and full-time mom. When she isn't writing or playing with her daughter, she's reading and crafting. She lives with her husband and family in Florida.