Ambush in the Everglades Tour and Giveaway 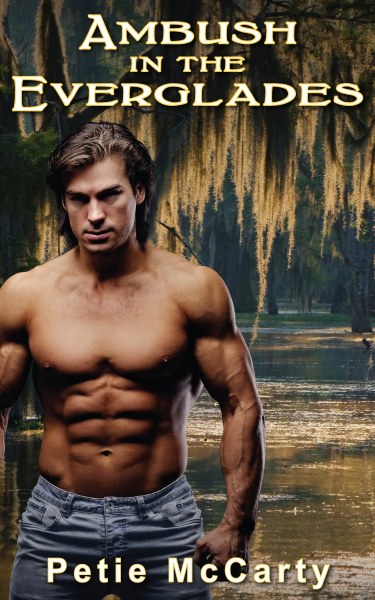 Ambush in the Everglades
by Petie McCarty
Genre: Romantic Suspense

Plenty of action-adventure in this romantic-suspense tale. Photographer Kayli Heddon is given the biggest assignment of her career—a photo essay on the Everglades Restoration—and a special airboat safari is arranged, so Kayli can get her pictures. What she doesn't count on is being stranded alone in the Everglades with her handsome and unpredictable airboat guide. Kayli is forced to learn some tough lessons. Trust means everything in the dangerous River of Grass, and a skilled partner makes all the difference in your survival.

Skye Landers takes the airboat safari gig as a favor to his cousin who is called out of town. Skye doesn't expect the governor's photographer to catch his eye, but Kayli Heddon is unlike any woman he has ever met. He knows he should keep his distance, but common sense flies out the window whenever she gets near.

Unfortunately, Kayli thinks honesty is the most important thing in a relationship—any relationship—and Skye Landers is a fraud. When secrets surface from his past, Kayli and Skye are soon on the run from more than just alligators.

The trees were large and close together at the south end of the island where Landers had tied up the airboat. Kayli made sure to stay close behind Landers, so he broke up any spider webs stretched across the overgrown path. She didn’t care if he wondered why she stuck to him like a tick. The Glades had the biggest spiders she had ever seen, and she’d die if she got a faceful of web.
The only thing she liked less than the big banana spiders in the hardwood hammocks was the famous Florida palmetto bug—a giant behemoth of an insect with oversized brown wings and a GPS tracking system, which allowed the monsters to zero in on your position and fly right at you when spooked. Alligators and snakes, she could handle. Big, nasty bugs were another matter altogether.
Landers passed a gumbo limbo tree and pulled back a weighty branch as he passed so she could slip through the opening. Instead, the toe of her sneaker caught on a tree root. She tripped and pedaled at the air to regain her balance, stumbling forward a few steps as the branch flew back at her.
Thwack!
The leafy branch smacked the side of her head and shoulder, and she let loose a shriek. With a grunt, she fought to shove the branch away and pressed through to the other side where Landers waited, looking concerned.
“Are you all right?”
Well, maybe not all that concerned, but at least a little.
“Sorry, I thought you were right behind me,” he said. “You’ve been sticking like glue.”
More sass. Thank you very little.
“Well, I was, but I tripped. I tried to stay close, so you got all the spider webs,” she rambled, then wished she had just shut up since now she looked like a big baby.
He grinned and turned back toward the path, when Kayli felt a tickle on her leg. She couldn’t help herself. She had to look. Had Landers touched her somehow?
“Aaaahhh!” Her high-pitched scream could have awakened the dead.
Her muscles all froze in unison as she stared down at the ginormous palmetto bug clinging for dear life to the exposed skin on her thigh. Two antennae wiggled independently of the each other—back and forth to taunt her—and his nasty bug-eyed face audaciously tilted up to stare.
Paralysis sunk into her bones. Her mind screamed for her to brush the miscreant away, but her arms wouldn’t move. Her gaze remained glued to the shiny brown carapace covering the bug’s lower back. The insect body seemed to double in size right before her very eyes. Oxygen only entered her lungs in short jerky gulps.
Landers turned back around. “What’s wrong with you?”
One look at her face, and his frown vanished. His gaze swept down her body, and with a lightning flash movement, his big hand slapped the over-sized bug into the nearby ferns.
“Oh my gosh, thank you! I’m terrified of roaches,” she wheezed blindly, her eyes squeezed tightly shut.
In the next breath, she went dumbstruck with horror, feeling her lips form those words against the side of his neck.
She had crawled him like a tree!
His head twisted to see her face, but she turned away, casting a swift glance over her shoulder before leaping backward off him. Her fingertips tingled from the feel of the muscles in his back. She gauged his expression for fallout from her horrific faux pas.
No smirk. That’s good.
Landers’ lips were slightly parted, and he looked as shocked as she felt.
Holy smokes! His cheeks are pink.
She watched him take a deep and, it appeared, stabilizing breath. She alternated her gaze between staring at him and split-second glances down at her legs to make sure the evil brown monster hadn’t mounted a second attack.
He stared back, his eyes wide. “You really are scared of roaches,” he finally said, so quiet she almost couldn’t hear him.
She nodded.
“Wow.”
“Sorry. When they get too close, I panic and I don’t really know what I’m doing.”
“Yeah.” He nodded almost imperceptibly, still studying her as though she would fly apart.
“Once I ran out of a friend’s house and across the street when a palmetto bug chased after me, and I only remember landing on the curb outside and not how I got there,” she said, feeling desperate to explain.
“Wow,” he repeated, his voice still soft. “Makes me wish I had a pocketful of the suckers.”
The whine of an airboat in the distance grew audible. Her whole body had warmed enough to flush her pink—she had acted like an idiot for Pete’s sake—and the heat had no chance to retreat when she could still feel his rock-hard body pressed against hers and her hands gripping his broad shoulders for support.
“Sorry about that.”
“I’m not.” His voice rumbled low in his chest, and his eyes held hers captive.
The airboat’s thrumming roar grew closer. “We’d better go,” he said.
She tore her gaze from his and searched the immediate area around her legs. No surprise attacks. When she looked up, his smirk had returned, and her heart sank.
“I’ll watch for roaches,” he teased and brushed against her arm as he pushed past.


She curled all ten fingers at his retreating figure and growled in her throat, then shot a quick glance all around before hustling after him.

Petie spent a large part of her career working at Walt Disney World—"The Most Magical Place on Earth"—where she enjoyed working in the land of fairy tales by day and creating her own romantic fairy tales by night, including her new series, The Cinderella Romances. She eventually said good-bye to her "day" job to write her stories full-time. These days Petie spends her time writing sequels to her regency time-travel series, Lords in Time, and her cozy-mystery-with-romantic-suspense series, the Mystery Angel Romances.

Petie shares her home on the Cumberland Plateau in Tennessee with her horticulturist husband and an opinionated Nanday conure named Sassy who made a cameo appearance in No Angels for Christmas.