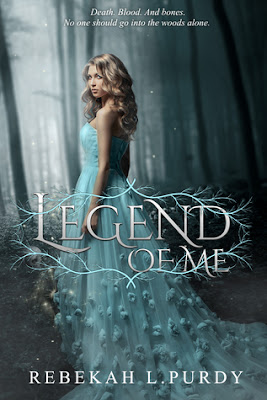 No one should ever go into the woods alone.Brielle has grown up listening to tales of a beast that attacks humans, leaving behind only a scattering of bones and limbs. It’s probably the elders’ way of keeping little children in line, but it doesn’t explain her grisly premonitions of blood, claws, and severed heads.But when Brielle finds a mangled body in the woods, she begins to wonder if the grim stories may actually be true. Soon, Lord Kenrick, Knight of the Crowhurst Order, arrives asking questions about the legendary monster. Brielle’s attraction to him is immediate and undeniable. She volunteers to help him search for clues to the creature’s existence, despite her suspicions about his timing.As her seventeenth birthday approaches, Brielle’s nightmares worsen and more villagers go missing. If Brielle doesn’t figure out the connection between Kenrick, the beast, and her visions, more people will die. As Brielle falls deeper in love with Kenrick and deeper into the snares of the abominable beast, she’ll become part of a legend so great, no one will ever question its validity again.

Legend of me is an original fairytale. It has the magic, the legend, the fantasy and the romance to awaken the inner beast. I loved every minute of this story. Some books you can tell are going to be good from the first page and I was addicted to every word. I didn't want to put this down.Brielle lives with her Gram in a desolate cottage. They have always lived on the outside of town and Brielle struggles to fit in. She's a kind, sweet girl, but finds it hard to follow the conventional rules. Her best friend, Rhyne has gypsy blood in his veins. He is accepted by the town but is expected to ignore his roots. Unfortunately, there has never been a spark between the two friends but they love each other as family.The woods are known to hold a dark secret. One that should be avoided in the dark of night. Legend has it there is a monstrous beast lurking in the mist. Nobody has ever survived long enough to confirm the tale but there are many stories.Brielle has always been infatuated by Rhynes cousin, Raul. He's a travelling gypsy and Bri always looks forward to his visits. Raul is haunted by his own dark secrets. He is a hard man and has a questionable past. He cares for Bri but it isn't that simple.Kenrick is new in town and has come in search of the beast. He cannot deny Bri to be the most beautiful women he has ever seen. He is drawn to her and can't stay away. Lucky for him Bri wants to help him with his research. A love triangle is formed but Bri is warned to protect her heart. Kenrick's main goal is to find the beast and Raul travels a lot. Her Gram wants to protect her and keep her safe. Unfortunately, her heart isn't the only problem. The beast is on a killing spree and Bri is having visions of the attacks. Her Gram is a healer and magic is in her bloodline, but the town folk are mundane. The truth must be guarded. The nightmares are beginning and the clocks ticking.5 out of 5.*I received an ARC in exchange for an honest review.
Posted by DanielleDuncan at 04:30