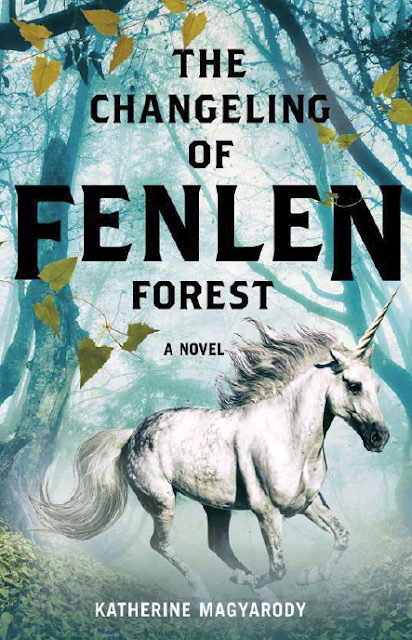 The Changeling of Fenlen Forest

Elizabeth thinks she knows the gloomy Fenlen Forest. But when her treasured unicorn fawn, Sida, goes missing, Elizabeth tracks her into a strange land where the people think Elizabeth is a changeling, a malignant being who too closely resembles a missing girl.

If Elizabeth can find her fawn and uncover the fate of her lost double, can she stop the fear from turning into hate? To solve the deepening mystery, Elizabeth befriends a handsome, skeptical young shepherd whose stories hint at a dark secret lurking at the forest’s edge, and follows a herd of wild unicorns with the ability to unlock the past. 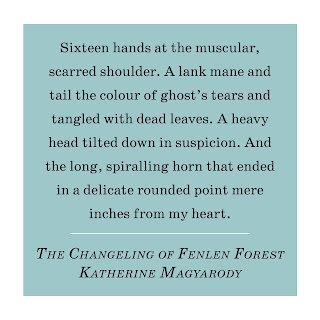 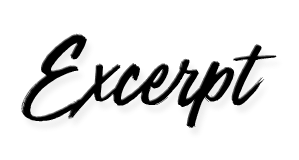 Ma raised me alone under the reaching shadows of Old Fenlen Forest, at the end of the civilized world. It was her and me in our small log house, and the mule trying to sneak into our vegetable patch. We weren’t always alone. When I was very small, my smiling, whistling father was with us. The three of us rode in a pony cart and we sold horn spoons and copper pots and spools of ribbons and fine-toothed combs and beauty ointments all down the old stone roads that start at Gersa’s capital of Terth and fan out like a star. Our fortune was made on the lesser cart tracks that connect the high roads like the uneven lines of a spider’s web. Pa told us that west was best because he loved riding into the sunset.
But one day, we changed directions and started riding east, squinting, towards the rising dawn. The old roads brought us through all the towns, villages and hamlets in East Gersa, until tall grass started forcing itself between the paving stones that tumbled into the ditches. A day after the last village, the gently sloping road petered out at the edge of the forest. There were no more people we could sell to in this direction, but my father said we couldn’t go back up the road. I no longer remember what reason he gave. But the next morning the dusty grey pony was gone, and my father with it. Ma and I waited for him to come back, to hitch up the pony again and take us in a new direction. After three days, our food ran out. 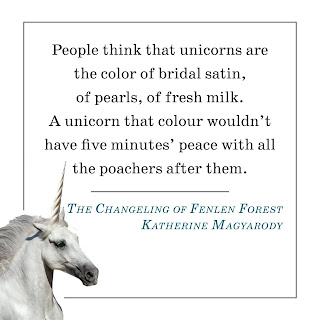 I was still too young to walk so far at night, so Ma put me in the small trundle bed and turned up our blanket, a rough weave of old fabric ends that we had never been able to sell. She set a skin of water beside me.
“You stay here,” she said. “And if your father comes back, he will find me at the village. Tell him I am not afraid.” She pressed her dry lips to my forehead and was gone into the evening shadows.
If you have ever been alone, you will know that time stretches into infinity and your thoughts loom over you. If I had been older, I would have tried to sleep by imagining myself into a better place. But I was too young to think of anything other than the truth. I was alone for the first time. My mother had left me, and I was sure that I would be eaten by bears long before my father came back.
Come, Pa, come, I prayed.
If you have ever been alone, you know that sounds become louder and the hairs rise up along your body, waiting for some sign of a predator. I was sick with fear at each creak of wind pushing through the wood of the pony cart, each rasp of wool and silk and samite as I pulled the blanket closer around myself. My own heartbeat was deafening.
Come, Pa, come.
And then there was a gust that shook the little pony cart and made the metal traces sing. I heard something outside, the slow, deliberate alternations of weight from hoof to hoof. It was him. He would swoop me up, hug me close and feed me sugared plums. Hope made me strong, and I pulled myself from the bed and ran to the door draped in my piebald blanket. I swung the little door open and saw…darkness. He would be on the other side of the cart, giving the pony a rub-down. I kicked down the wooden stairs and ran to the other side, spreading my arms to catch him.
Darkness.
The weak sliver of the moon barely shone off the creek, the meadow grass, the looming trees.
But I had heard right. There, there it was—a gleam, a smear of dark grey against the black silhouette of the massive forest. 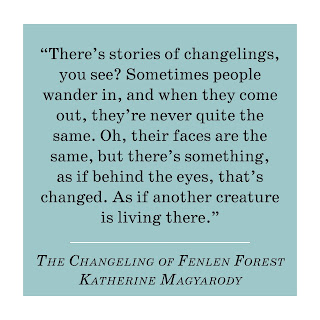 “Wait!” I screamed. He thought we had abandoned him. Heartbroken, he was leaving. I ran as fast as I could towards the grey and, as I approached, the shape swung out of the shadows toward me. I froze. It was not my father. It was not a bear. It was something much more terrifying.
Sixteen hands at the muscular, scarred shoulder. A lank mane and tail the colour of ghost’s tears and tangled with dead leaves. A heavy head tilted down in suspicion. And the long, spiraling horn that ended in a delicate, rounded point mere inches from my heart. 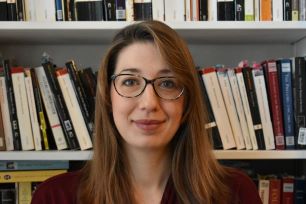 Katherine Magyarody grew up in Toronto, Ontario. During graduate school, she researched the history of adolescence, taught children’s literature, and wrote fiction on the sly. Her debut short story, “Goldhawk,” is anthologized in PEN America Best Debut Short Stories 2017. She currently lives in Connecticut, where she blogs about interesting and weird unicorns at https://offbeatunicorn.com/about-offbeat-unicorn/.

a Rafflecopter giveaway
Posted by DanielleDuncan at 23:10