My Pride Is Sealed #Out Now #Review 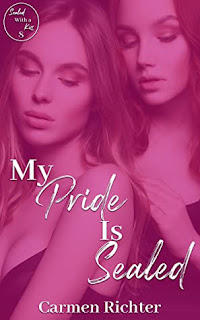 My Pride Is Sealed

by
Carmen Richter
Maddie
What happens when you realize you’re in love with your best friend?

When I figured out that the person who had been making Zoe’s life a living hell for months was trying to use me to hurt her…well, let’s just say I ended up doing more harm than good in my attempts to stop it.

But if you were hoping for a story about how Zoe and I’s friendship blossomed into a beautiful love despite what I did, you’ll be disappointed. No, I stood up at the altar with Zoe and watched while she promised forever to the man she’d loved since we were teenagers.

This is a story about how, when I was least expecting it, I met a woman who helped me embrace who I really was, and about how falling in love with Autumn helped me learn how to love myself.

Autumn
The first time I met Maddie, I could see the pain lurking behind those gorgeous emerald eyes. And, for some reason I didn’t understand, I wanted to be the one to fix it.

Crazy, right? I was still healing from my own heartache, yet for some unknown reason, I couldn’t stop myself from wanting to be the one to make Maddie’s pain go away.

The more Maddie opened herself up to me and I saw the shy, vulnerable, sad girl underneath, the more determined I was to make her see how beautiful she was, inside and out. And the more confident she became, the deeper my feelings for her grew.

But when my ex-girlfriend saw me moving on with my life, she suddenly realized what she’d lost and decided she was going to get it back. Whether or not I liked it.

Trigger Warning: This book deals with the subject of female-on-female sexual assault and mild inappropriate touching of a minor.

Note: This is the eighth book in the Sealed With a Kiss series, and while it may be read as a standalone, it contains major spoilers for Zoe and Elijah’s books.

***Part of a continuous series. My review does give details of previous books***

My pride is sealed perfectly wraps into Zoe and Elijah world. It’s hot and heavy with scenes of an adult nature.

What happens when your best friend falls in love and it’s not with the person you wish it was? Maddie is into Zoe but Zoe’s all about Elijah. Can Maddie find her own happy ever after and hold onto her best friend.

Zoe is a famous musician and we’ve known about her stalk for a while now. The bit we don’t know is Maddie’s side of the story.

Autumn has her own heart ache but she’s about to become the person Maddie can lean on. The chemistry between these two is heated right from the start.

This is about exploring your sexuality. It’s full of secret and hidden truths. It’s a juicy new addition to the series and I really enjoyed uncovering the details.

Posted by DanielleDuncan at 11:26