Nearness of You Tour and Giveaway! 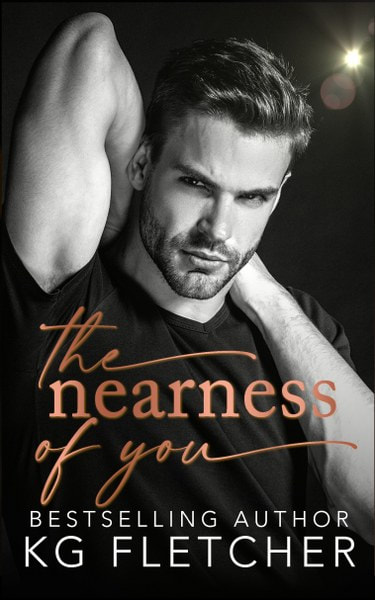 The Nearness of You
by KG Fletcher
Genre: Contemporary Romance

She's got the voice. He’s got the body. When their music and fashion worlds collide, will their wildest dreams come true?
Lauren Rose always imagined her life in show biz. Singing classic love songs in posh hotel lounges by night and teaching theater to kids by day, she wonders if her big break will ever come. Enter a charming British supermodel, and she's starstruck for sure.
David Randle needs a break. Solely focused on his successful modeling career for over a decade, he shifts gears and channels all his energy into the launch of his high-fashion debut cologne, Drive. But after arriving in Atlanta to attend his sister’s wedding, he’s propelled off course by a beautiful lounge singer performing at the hotel where he’s staying.
When David invites Lauren to New York to see him rev up for a fashion shoot to promote his new cologne, he must steer clear of his uptight assistant who tries to put the brakes on his newfound happiness.  And with her stunning Brit impossible to resist, Lauren knows she could potentially be a distraction and derail the success of the biggest launch of his career.
Can the celebrity couple navigate the precarious speedway of fame and fashion, or will they crash and burn?
The Nearness of You is a breathtaking standalone contemporary romance novel. If you like swoon-worthy magnetism, celebrity situations, and speeding hearts, then you’ll adore KG Fletcher’s unforgettable story.
Buy The Nearness of You for a serenade of passion today!
Goodreads * Amazon

Looking up with a smile, ready to accommodate another song request, she was taken aback, her breath catching in her chest. The man was tall, dark, and handsome and he looked very familiar. She started to panic, trying to place him in the shadowy light.

“I didn’t mean to startle you. I wanted to ask… the last song you just sang. I seem to recognize it but can’t quite place the name. Who is the artist?”

The molecules in her brain shifted, and she was suddenly aware of who was standing before her. In an effort not to faint or start screaming, she placed her hand on her heaving bosom and tried to breathe again, all the while his steady gaze penetrating her entire being. She swallowed hard, trying to get some moisture back into her throat so she could respond, but it felt as if her entire mouth had been force-fed a bucket of sand. The gorgeous man was holding a martini glass and looking like he had just stepped out of a high-class advertisement, his designer clothing obvious.

“Umm… that song was….” She cleared her throat. “It’s a Richard Rodgers, umm, song.” Eying his drink a second time, she reached for it and took it from his hands. “Do you mind?” She didn’t wait for his response, anxious to send moisture onto her hot tongue, throwing the drink back in one gulp before choking on the alcohol burning down her throat. “Oh my god! What was that?” she asked scowling.

The gorgeous man gently took the empty glass back from her, his index finger brushing her hand slightly. “Well, it was my gin martini. May I get you something more to your liking?” He tried not to smile but his blue eyes tinged with humor and gave him away.

Lauren held the back of her hand to her mouth and stared at him. “I know who you are,” she whispered, wide eyed. “You’re the super…” He interrupted her quickly by abruptly grabbing her by the elbow.

“Let me buy you a drink.” He started to lead her to the mahogany bar where her friend Tim was bartending.

“Hey Lauren. How’s it going?” Tim asked as he wiped down the polished wood in front of them. Could he tell she was coming undone being in the presence of one of the most stunning, sought after male models on the planet? Flashbacks of a recent trip to New York with some of her girlfriends came to mind when they stood in the middle of Times Square and took several pictures of the man’s famous image plastered on a giant billboard. His gorgeous, half-naked body was on full display for all the world to see wearing nothing but designer underwear. She started to swoon just thinking about it.

“Good, Tim.” Her reply came out a little too quickly, her voice three octaves higher than normal. She glanced at the illustrious man who stood mere inches from her, not sure if she would be able to continue a conversation. Her entire body felt like it was buzzing and she feared she might hyperventilate. Slowly, she eased onto the leather bar stool, hoping it wasn’t obvious she was coming undone.

“Sparkling water for you?” Tim asked knowingly. Lauren never drank while she performed, a lesson she’d learned many years ago when she had made the mistake of going to happy hour with friends before a show. Consuming one too many shots of tequila, she couldn’t remember the lyrics that night, and was lucky the manager hadn’t fired her.

Leaning his strong arm against the back of her bar stool, he reached for a cashew in a crystal bowl causing his bulging bicep to come very close to grazing her breast. “I should like another gin martini, Tim. Hendricks please, with a cucumber garnish.” His British cadence was sophisticated and debonair, accentuating his high-class image.

Tim placed a green tinted bottle of sparkling water in front of Lauren and proceeded to mix the martini. As she tried to open her drink with trembling hands, she could feel heat tinge her cheeks. The damn cap wouldn’t budge.

“Allow me, Lauren,” he offered, the “L” of her name sounding beautiful with his lilting articulation. He effortlessly turned the cap just once and handed it back to her, his chiseled features dangerously close to her lips. She smiled politely before taking a sip and almost choked when he started to speak, palming her back with his hot hand.

She licked her lips and placed the bottle back on the bar. “Yes, thank you.” Her face continued to flush, and she was surprised when he leaned closer and whispered into her ear.

“It’s nice to meet you, Lauren. You have a lovely voice.”

His warm breath made her insides tingle and she had to inhale deeply before she could mutter a reply. “Thank you. It’s nice to meet you too… you have a lovely… face.” She forced herself not to roll her eyes after the words came out of her mouth, pressing her lips together in a tight line. What a stupid thing to say.

Dubbed, “The Singing Author,” KG Fletcher lives in her very own frat house in Atlanta, GA with her husband Ladd and three sons. As a singer/songwriter in Nashville, TN, she became a recipient of the “Airplay International Award” for “Best New Artist” showcasing original songs at The Bluebird Café. She earned her BFA in theater at Valdosta State University, and has traveled the world professionally as a singer/actress. She currently gets to play rock star as a backup singer in the National Tour, “Remember When Rock Was Young – the Elton John Tribute,” www.almosteltonjohn.com She is also a summer artist-in-residence at her alma mater performing roles in musicals for the Peachstate Summer Theatre program, her favorite roles to date being Donna in Mamma Mia!, and Marmee in Little Women the Musical.
KG is a hopeless romantic continuing her work on her original cabaret act called, “The Novel Romantic – an unexpected evening of sweet & spicy love” to help promote her romance novels. As a full-time indie-artist, a particularly thrilling moment was when her Amazon best-selling romance novel, Georgia Pine became a 2019 Maggie Award of Excellence Finalist. KG loves to interact with readers on social media, and is a conference speaker sharing how music can enhance a writer’s experience.
Website * Facebook * Twitter * Instagram * Pinterest * Bookbub * Amazon * Goodreads

Follow the tour HERE for special content and a giveaway!
$25 Amazon gift card + ebook of The Nearness of You
a Rafflecopter giveaway