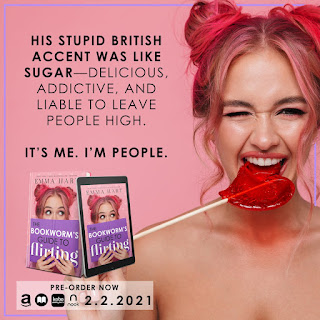 💜The Bookworm's Guide to Flirting by Emma Hart is coming this February💜
I put my book next to his mug and rolled my eyes. “I don’t know why you agreed to do a senior yoga class. It’s the stupidest thing I’ve ever heard. They can barely even pick up their own glasses.”
“Oh.” He winced, then shook his head. “You make it sound like they’re all on their deathbeds, sweetheart.”
I hated it when he used pet names.
Sweetheart. Darlin’. Love.
He tossed them out the way beads were tossed at Mardi Gras, and they may as well smack me in the eye like the beads did once.
His stupid British accent was like sugar—delicious, addictive, and liable to leave people high.
It’s me. I’m people.
It gave me tingles in all the wrong places, and that really wasn’t great when you considered that we shared a bedroom wall and I was the proud owner of a prolific dirty mind.
“They might as well be on their deathbeds,” I muttered, shaking off the thoughts of my roommate’s accent—thoughts I had zero business having. “They’re gonna send me to an early one.”
Dylan laughed as he reached for his tea. “Saylor, that’s not gonna happen. You could have weathered the asteroid that killed the dinosaurs.”
“I think that was a compliment.”
“It’s something along the lines of complimenting your strong will,” he said slowly.
“Thank you. I am rather proud of it.” I grinned. “What are you doing this afternoon? Are you breaking for lunch?”
He nodded slowly. “I’m with Seb all afternoon. He saw his doctor this morning for another scan on his shoulder, so we’ll hopefully be able to up his weights again today.”
I shuddered. Ugh. Weights.
“Are you considering taking me up on my offer of coming to the gym with me?”
“Can I lift wine glasses instead of weights?”
“That’ll be a no.”
“Then that’ll also be a no,” I said flatly.
PRE-ORDER →
Amazon US → https://amzn.to/319P5ev
Amazon UK → https://amzn.to/37Weh9A
Apple Books → https://emmahart.pub/TBGTFapple
Nook → https://emmahart.pub/TBGTFnook
Kobo → https://emmahart.pub/TBGTFkobo

Posted by DanielleDuncan at 20:41