CHASTITY FALLS by L.A. Cotton has a brand-new look!!   Start this angsty new adult series for FREE with book 1, Loyalty and Lies: Ana and Jackson TODAY!! 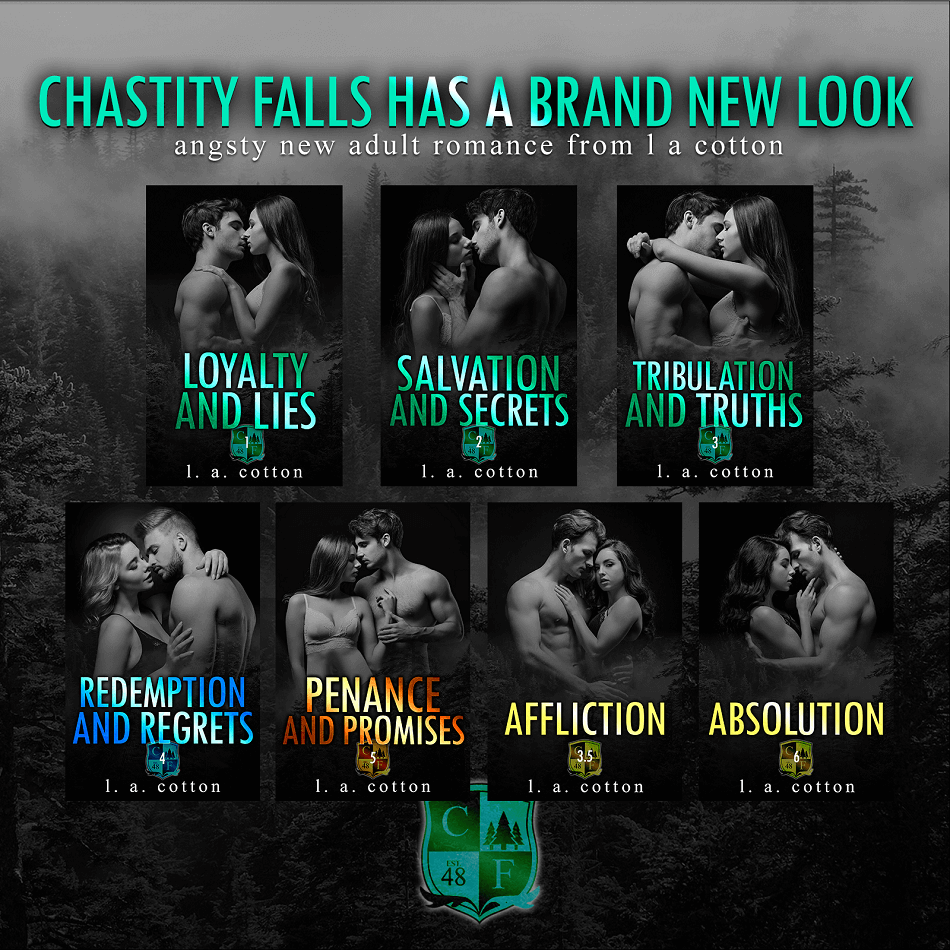 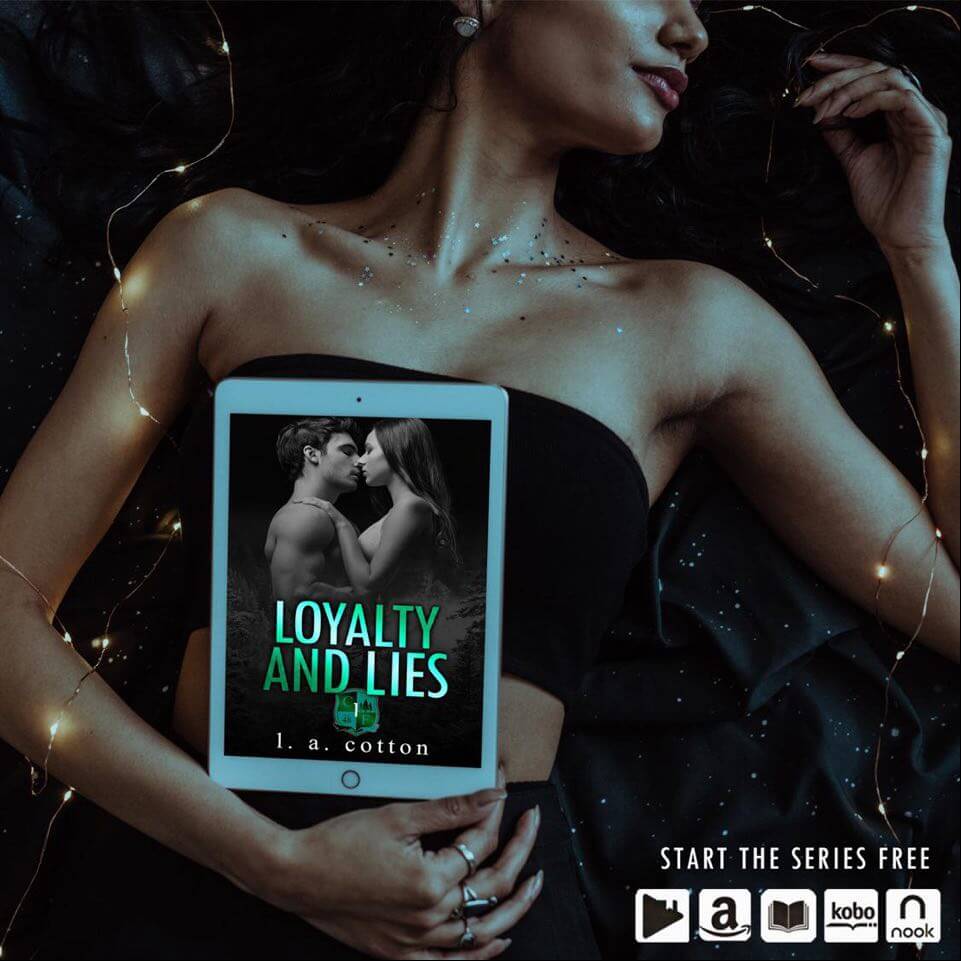 Blurb: After suffering a huge loss, eighteen-year-old Savanah Parry hopes Chastity Falls Academy will be the fresh start she so desperately needs. But whispers of corruption and gangs, turf wars and murder, overshadow Ana's new life as a freshman. Especially when she catches the eye of the captain of The Fallen football team for all the wrong reasons. Determined to keep her head down and survive, Ana swears off guys. Until she meets the gorgeous, yet mysterious, Jackson. He sees past her walls, her pain and secrets, and slowly, Ana finds herself unable to fight their undeniable connection. But Jackson harbors a dark secret too... One that might destroy her. *Loyalty and Lies is the first book in Ana and Jackson’s trilogy. Due to mature content this book is recommended for readers aged 17+

MY REVIEW:  I'm slowly making my way through L.A. Cotton's books. Loyalty and Lies is one of her early works and it's easy to see how her angsty romances are progressing into her newer work.

This is a New Adult college romances about a girl with a haunted past. She isn't the fun-loving teenager most of her friends are, but Chastity Falls Academy is changing things. Savanah aka Ana is hoping to keep her head down and get on with her studies. The sadness of her past keeps her from smiling but that all changes when she meets Jackson. He starts with a simple offer of coffee and soon becomes more than she ever thought possible, but will the web of lies untangle into some worth fighting for?

Audiobook and Ebook read. 4 Stars out of 5. 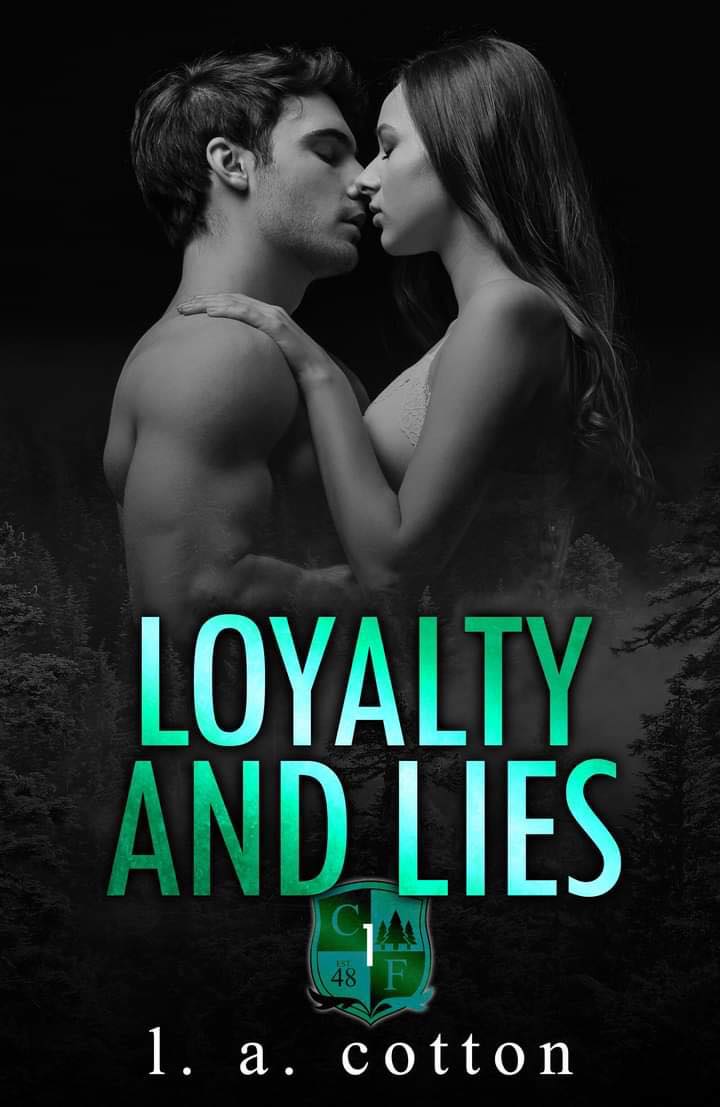 Add Salvation and Secrets, Book #2, to Goodreads: https://www.goodreads.com/book/show/36566106-salvation-and-secrets AVAILABLE NOW! Universal: books2read.com/SalvationandSecrets   Blurb: Chastity Falls was supposed to be Ana Parry’s fresh start. But what started as her salvation soon became her worst nightmare. After losing the very thing that gave her reason again, Ana is back at Chastity Falls. Holding on by a thread and trying hard to forget about Jackson isn’t easy when she’s determined to uncover the Donohue’s biggest secrets. Walking away from Ana was the hardest thing Jackson Pierce has ever done, and months later, he refuses to forget. He can’t. Because rising tensions with a rival town mean Ana is still in harm’s way and, this time, he’s determined to protect her—at all costs. Loyalty drove them apart, but will secrets piece them back together? Or tear them apart for good? *Salvation and Secrets is the second book in Ana and Jackson’s trilogy. Due to mature content this book is recommended for readers aged 17+

MY REVIEW: Chastity falls book two is a continuous story from book one. They need to be read in order. We’re back at the academy and Ana is already trying to solve some of the mysteries that changed her life.

Jackson said they couldn’t be together to protect her but these two are like magnets so it’s hard for them to stay away.

There’s one more part to Ana and Jackson’s story so this is just the start to the unraveling world.

Audiobook and ebook read. 4 Stars out of 5. 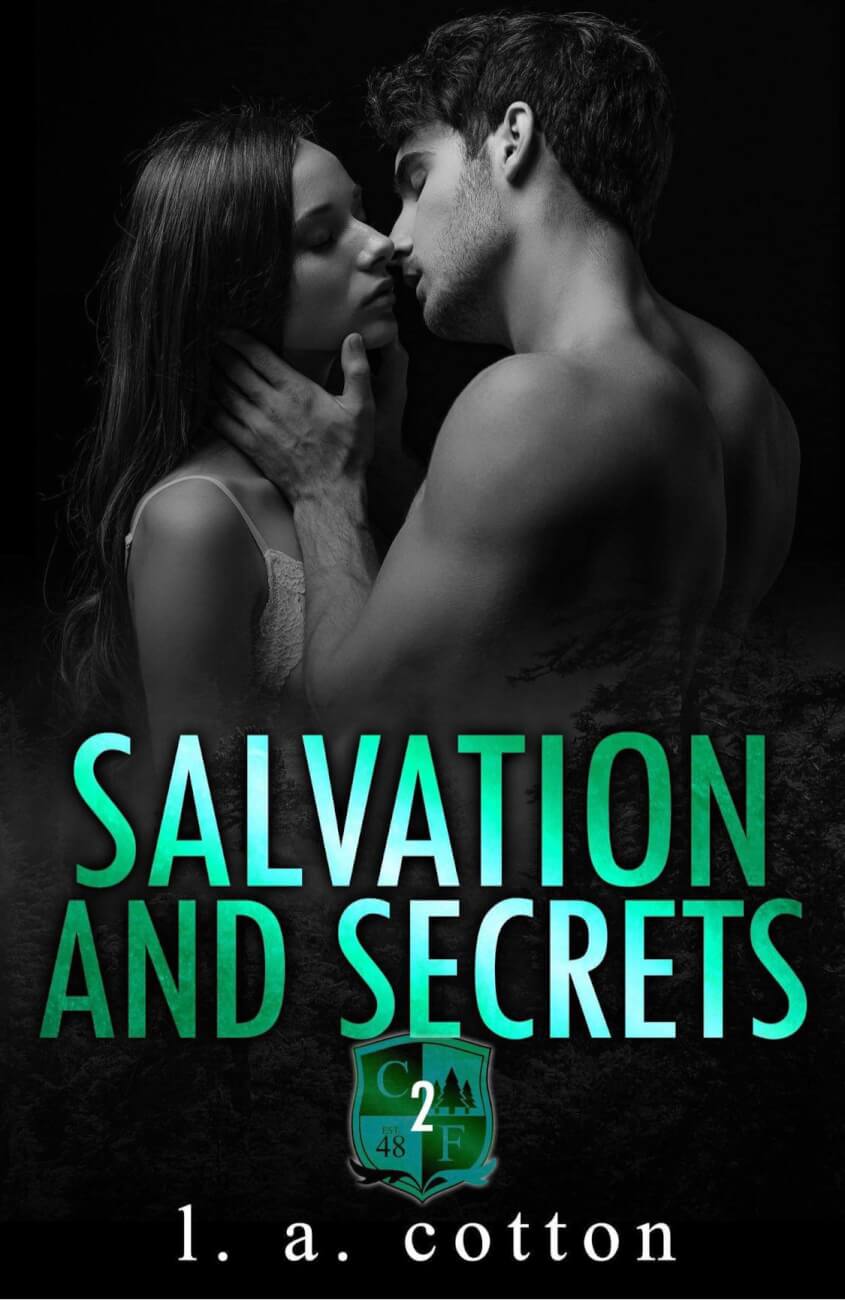 Blurb: When Ana revealed her suspicions to Jackson about the circumstances surrounding his father's death, she never expected it to be the catalyst for a series of events that could change everything. It was supposed to save him, not push him away. But now Ana is left watching the person she loves more than anything, lose himself to vengeance. Jackson has spent most of his life loyal to the man he calls uncle. But since learning that Marcus Donohue might have been responsible for the death of his father, Jackson is consumed with the need for revenge, no matter the cost. Will the truth finally set Jackson free or will it ruin his last chance at happiness with Ana... and a life out from under the shadows of the Donohues? *Tribulation and Truths is the final book in Ana and Jackson’s trilogy. Due to mature content this book is recommended for readers aged 17+

MY REVIEW:  Part 3 in a continuous series. A college romance about two star crossed lovers. We’ve watched Ana and Jackson get together, break up and fight their chemistry. In this instalment the secrets and lies are unraveling.

This is more than a college romance. Jackson comes from a family powerful family with complications. His relationship with Ana is one of love but he wants to protect her. Can they finally find a happy ever after through the mist of badness in the world.

*Audiobook and ebook read.4 Stars out of 5. 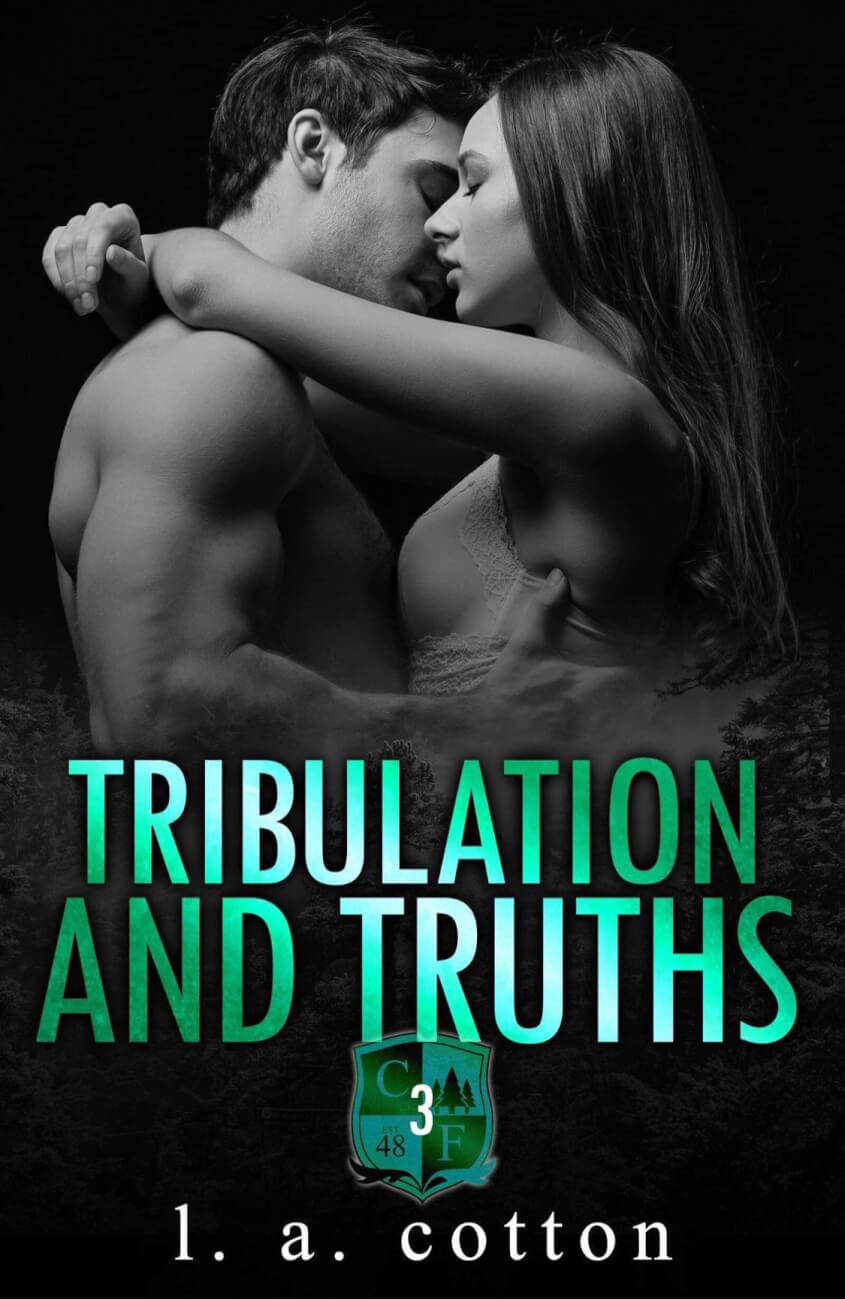 Add Affliction: A Chastity Falls Short Story to Goodreads: https://www.goodreads.com/book/show/56879511-affliction AVAILABLE NOW! Universal: books2read.com/AfflictionCF   Blurb: Dennis Hayes knows all too well that his life is no place for a relationship. He's at Chastity Falls Academy to play football and do his job. Not meet girls or have fun. But some rules are meant to broken, and the second his lips touch hers, Dennis knows he's going to break his most sacred one: never let your heart rule. Cassie Malson watched her friend's life fall apart at the hands of The Fallen—Chastity Falls Academy's football team. She never expected to end up in the same position. The lies. The sneaking around. Telling herself it'll all work out in the end. Because deep down, Cassie knows if she isn't careful, he'll bury himself so far in her heart she might never recover. They're from different worlds. They want different things. It can never work. Can it?

Affliction is a spin-off novella from the Chastity Falls world. It can be read as a standalone.       Add Redemption and Regrets, Book #4 to Goodreads: https://www.goodreads.com/book/show/36566298-redemption-and-regrets AVAILABLE NOW! Universal: books2read.com/RedemptionandRegrets   Blurb: Four years ago, I had everything. All it took was the snap of his fingers and he ripped it out from under me. Betrayed, by my own father. His enemies want me dead and old allies want me back in their ranks to help take what's owed. And while I’m trying to figure out what I want, there's her. The one I watch from the shadows, afraid to bare myself to her—the real me. Hard. Cold. Deadly. She should fear me—Braiden Donohue—but I’m not the only one keeping secrets, and I must discover what she's hiding. Before it’s too late. Redemption will be afforded, regrets will be atoned.

Blurb: Seven years ago, Ana Parry walked into Chastity Falls Academy and changed the lives of Jackson Pierce and Braiden Donohue. Her arrival set into motion a series of events that none of them could have ever predicted. But they got out. Escaping Chastity Falls, they left behind a life built on lies and secrets, danger and fear. … Didn’t they? Penance will be served, promises will be made. Welcome to the end of Chastity Falls.

Blurb: It’s supposed to be a job like any other. Get in. Do the deal. Get out. But when Dennis Hayes spots her across the room, he’s sure he must be seeing things. It can’t be Cassie Malson, the only girl he ever loved. Still loves. Because four years ago he left her to live her dreams—without him. He doesn’t want to open old wounds, but Dennis can’t walk away again. He won’t. Not until he finds out the reason for the haunted look in her eyes. Even if she hates him. Even if the truth hurts him more than he ever anticipated. Even if it means going against everything he’s ever known. Because Cassie Malson is his absolution, and this time he’s determined to save her heart … even if he risks losing his own in the process.

About the Author: Author of over thirty mature young adult and new adult novels, LA COTTON is happiest writing the kind of books she loves to read: addictive stories full of teenage angst, tension, twists and turns. Home is a small town in the middle of England where she currently juggles being a full-time writer with being a mother/referee to two little people. In her spare time (and when she’s not camped out in front of the laptop) you’ll most likely find LA immersed in a book, escaping the chaos that is life.

Posted by DanielleDuncan at 05:46