MY CONE AND ONLY #CoverReveal 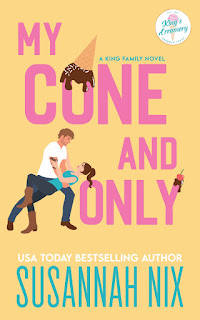 MY CONE AND ONLY, a brother’s best friend romance by Susannah Nix, is coming July 20th!

Following the conclusion of the popular Chemistry Lessons series, award-winning and USA Today bestselling author Susannah Nix is spinning off a brand new series set in the small town of Crowder, Texas, home of the family-owned King's Creamery ice cream company. This six-book series will follow the siblings in the King Family as they find and fight for love.

Cover design: Cover Ever After

Too bad she’s off-limits. He’s not going to be the jerk who messes around with his best friend’s little sister, so he keeps his feelings bottled up and settles for acting as her protector instead.

Andie Lockhart’s dreamed of kissing Wyatt for as long as she’s known what kissing is. But since he’s dated nearly every woman in town but her, she’s long since accepted he’ll never see her as anything more than his best friend’s tomboy little sister.

When a real estate developer threatens the beloved old house Andie inherited from her grandmother, her white knight Wyatt swoops in with his handyman skills to save the day. But the more time they spend working on the house together, the harder it becomes to ignore their irresistible attraction.

Until the night an accidental kiss blows the lid off those feelings they’ve both kept buried.

After that, things between them get a lot hotter—and a lot more complicated. Forbidden love, broken promises, family secrets, and jealousy all threaten to tear them apart. If he intends to hold on to the woman he loves, Wyatt will have to put everything on the line.

Posted by DanielleDuncan at 16:15