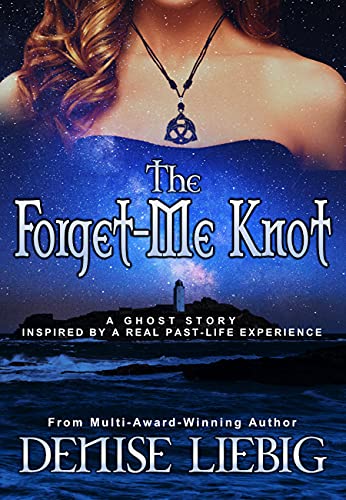 When a beloved heirloom bridges the past with the present, can a young woman bury her dead to build a future with the living?

Natalie Lane has never been in love. Twelve years after her father’s premature passing, she’s still caring for her heartbroken mother. Determined to avoid a similar future, Natalie focuses on her therapy practice instead of romance. But when a man claiming to be a ghost enters her office, a man only she can see, she realizes that her overworked mind might need a rest.

Fearing a nervous breakdown, Natalie goes on sabbatical to England, leaving everything behind except her cherished Celtic trinity-knot pendant… her forget-me knot. Before she can relax, however, the man appears again, stalking her throughout the British Isles.

And her problems only mount when a visit to a local pub reveals an eerie connection to a former life and love. The more she learns about her past, and her necklace’s link to it, the more Natalie’s much-needed vacation turns into a journey of self discovery that threatens her very soul.

Can the forget-me knot’s secret help Natalie leave her past behind so she can finally find true love?

The Forget-Me Knot is a captivating standalone supernatural novel. If you like paranormal ghost romances with a time travel twist, historical fantasy, and stories drawn from real past-life experiences, you’ll enjoy this enlightening tale. 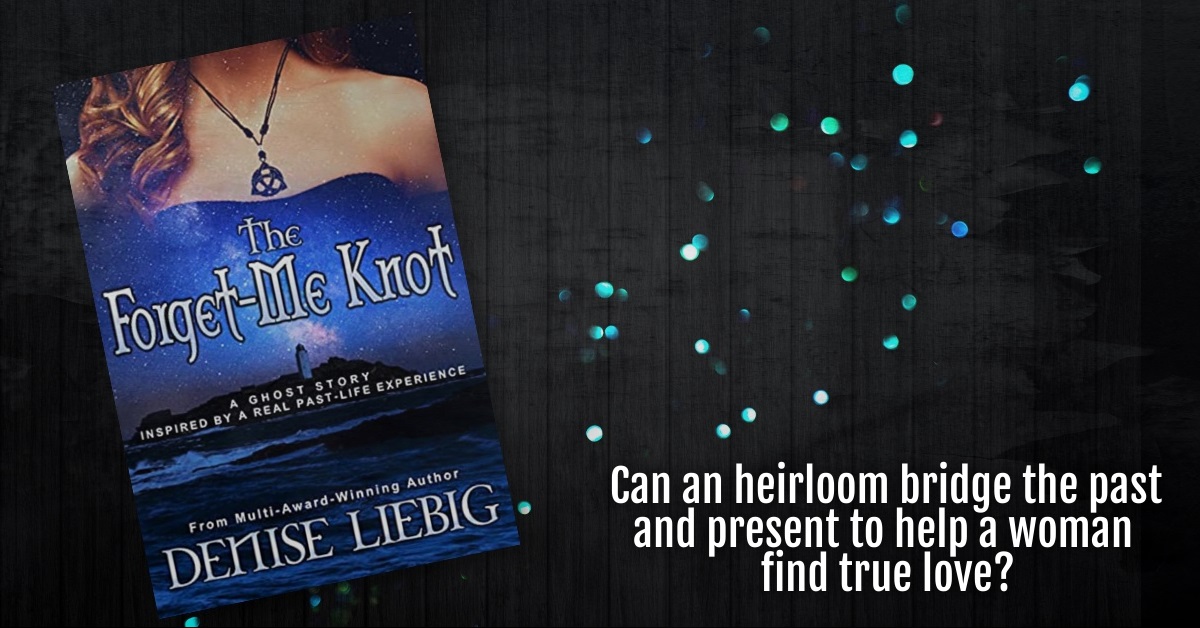 The freshly mowed lawn’s distinctly green scent mingled with the earthy aroma from the rectangular hole cut deep in its surface. The morbid perfume made my empty stomach queasy. I looked away to stare instead at my patent leather shoes, riddled with grass clippings and morning dew. Like a threadbare scarf, the pastor’s monotone voice hung uselessly in the crisp April air. He mentioned my name, Natalie, then June, my mother, and paused. In the silence, I shifted focus. My gaze drifted from my shoes and slowly scaled the silver stretcher just feet away, holding the dark, wooden casket.

I struggled to breathe. It was as if the shiny box lay on my chest, allowing only shallow breaths to escape.

Just days before, Dad left for Lane & Frost Architects, carrying his briefcase in one hand and his favorite plastic travel mug in the other. He raised the cup, revealing pictures of me, minus a few front baby teeth, smiling from beneath the clear acrylic cover. He gave the mug a brief shake, like a wave. I rolled my eyes at the former Father’s Day gift, then offered a new smile, now covered in braces.

Dad puckered his lips and blew her an air kiss before walking out the front door. As he descended the steps, I watched him crane his neck and take a sip of coffee, avoiding a drip, then two, bound for his brand-new button up. Despite the cup’s many leaks and overall lack of insulation, he filled it to the brim daily, regardless.

Offering Mom and me another smile, Dad backed his Super Beetle out of the driveway, covering his front teeth with his tongue to mimic the mug’s picture. Then he waved goodbye. Minutes later, in an intersection less than a mile from our home, Dad’s car was no match for a speeding utility truck whose driver ran a red light. When Mom received the call, she rushed to the scene, but it was too late. We later learned Dad’s last words were: “Tell my wife and daughter I love them.”

The first responder, a police officer and bowling buddy who was with him until the end, now stood next to me, sniffing periodically. I saw his reflection in the casket as he wiped his nose with the back of his gloved hand. Although it was thoughtful of the officer to attend, I wished my dad and his reflection were standing beside me instead.

“Heavenly Father…” The pastor’s voice caught my attention once more and drew my focus back to the crowd. From the reaction I saw in those surrounding us, I imagined his eulogy was moving, with powerful words that evoked tears in most of the attendants. But I didn’t hear those words, or maybe I couldn’t. Instead, I again gazed at the casket and the somewhat distorted images on its polished surface.

Mom stood on the other side of me, wrapped within Grandpa Lane’s sturdy arms. My other grandparents had already passed, but Poppy, as I called him, was always there for us, standing in for those who could not. With his daughter-in-law propped against his black dress jacket, Poppy rested his chin on her head and held on tight. A gentle, rocking sob grew from the depths of her broken heart and clung to the casket as the squeaky pulley lowered Dad into the earth minutes later. The police officer reached over and pulled me close. Although I didn’t know him well, I held on to the man and openly wept, staining his dress blues with my heartbreak.

Above my sobs, I heard Mom next to me and could only imagine what she was going through. I had lost my father, but in my mind, I believed her grief was much worse. She’d lost her soulmate.

I dried my tears, and with the pastor’s prompting, I left the officer’s side and stepped toward the hole. I wasn’t ready for goodbye, not yet. So I looked down and tossed a single red rose into the lonely depths and whispered, “I’m going to miss you, Daddy.”

I continued to stare at the casket while others moved forward and offered their roses and whispers until the wooden lid was scarcely visible. You’re loved, Daddy, I thought. Wherever you are, I hope you know just how much.

The crowd dispersed, and the bereaved walked to their cars. Some headed to our reception afterward; others went back to their lives and their families. Many hugged me when they passed. Despite their embraces, I felt empty, alone.

“Thanks for coming,” I said again and again. Hearing myself repeat those words brought the extent of my loss into focus. Barely sixteen, I felt as if I’d aged many years in only a few days, and life as I knew it would never be the same. That knowledge was reinforced when I heard Mom still crying behind me. I turned to see her head buried in a handkerchief as Poppy propped her up.

While Mom searched for a dry spot on the square of fabric, I studied Poppy’s furrowed brow and his tight lips that served as dams for the tears he struggled to suppress, meant for his only son. His anguish grew in the ever-deepening creases of his down-turned face, and he seemed to age right before me. My grandfather was a rock, but I’d just learned that even strong men didn’t live forever.

Standing there at that moment, watching my loved ones crumble, I vowed to be stronger, especially for Mom. I faced forward and tried to clear my thoughts, then dried my tears, promising to fight them in the future.

Later that night, I lay atop my covers, staring at the shadow-filled ceiling as the moonlight streamed into my room. When Mom’s sobbing finally subsided, the old house grew silent briefly before offering a series of creaks. The noise soon built into a familiar dance, coinciding with the rustling trees outside my bedroom window. It sounded like my parents’ recent tango lessons in our front room. Their missteps and the laughter they evoked, which had mingled with the floorboards audibly resisting their movement, was still fresh in my memory.

The tears I had promised to fight loomed beneath burning eyes. “I can do this,” I said in a shaky voice that almost mimicked the creaking house. “But I wouldn’t mind a little help.”

I sat up and stared at my closet door for several seconds before leaving my bed to cross the room and open it. I stepped inside and grasped for the ceiling light’s pull chain that dangled in the darkness. Once I made contact, I wound my fingers around the chain and yanked the light to life. From a top shelf, behind old toys and spare blankets, I withdrew a shoebox. I opened the lid to reveal the treasures hidden inside: several ticket stubs from high school football games, a twig, and a stick of gum. All were items my latest crush, Bobby Flynn, had once touched, discarded, or stepped on in the twig’s case. Bobby was tall and ripped, hot by everyone’s standards. The quarterback even smiled at me once. I couldn’t fit that leg-melting grin into the box, but the memory saw me through more than a few failed math tests and a nasty stomach virus.

I slowly closed the lid and caressed the cardboard surface, hoping the simple gesture would evoke an image, a feeling, anything that might help me forget my life for a while. Such an action, something I’d never revealed to anyone, had offered comfort on many prior occasions, and I’d hoped it would again. This time, however, I didn’t feel a thing. I closed my eyes and tried once more. Sadly, Bobby’s once cherished image vanished into an enormous, rectangular hole in the ground.

I opened my eyes, clearing the scene from my mind. “Not even my secret Crush Box can make this hurt disappear,” I mumbled. I ran my hand across the lid a few more times but still felt nothing. Disappointed, I tucked the box under my arm and tiptoed down the hall, through the back door, and into the night.

Across the patio stood Dad’s pride and joy, the barbecue, the same one he had grilled hotdogs on the weekend before. I opened the lid, allowing the moonlight to bring everything into focus. Bits of charred and half-cooked sausage stood at attention as I removed the grates and leaned them against the grill. Above the briquettes that remained, some still intact and only slightly ashen, I placed the shoebox, then doused it with lighter fluid. I removed the red lighter that dangled from a hook attached to the grill and clicked the trigger. The long flame glowed in the darkness, and I stared at it for several seconds before touching it to the box. As the fire leaped into the night, I wondered if I’d ever meet someone I’d love as much

as Mom loved Dad. After seeing how her heart had shattered in the wake of his loss, I also wondered if I’d ever bother looking. 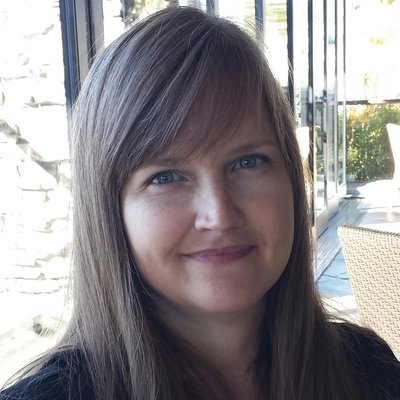 Denise Liebig is an award-winning author whose modern characters experience the past through time travel, reincarnation, the paranormal, and other twists of time. A fan of everything vintage, her desire to be a fly-on-the-wall during the early 1900s inspired her to research that era, which soon launched her writing career. When she’s not imagining stories about the past and writing about them, Denise lives in the present with her husband and three kids.