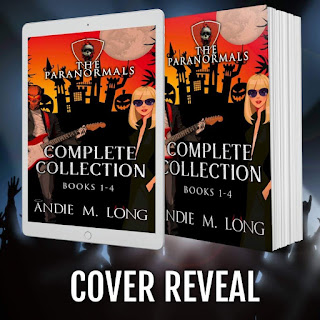 The Paranormals complete collection, books 1-4 releases on Monday June 28th. Pre-order your copy now for the special pre-order price of $4.99 (£3.54 in the UK). Collection will also be available in Kindle Unlimited and paperback.

The Paranormals. Four guys, one band, one big secret.

An incubus, a vampire, a shifter, and a satyr. Four best friends looking for success and superstardom. But it’s not only success that comes calling for them, love is in the air too.

Vampire guitarist Noah is blindsided when his ex, Stacey, also enters the reality show competition to win a recording contract.

Incubus Zak can no longer cope with juggling his newfound fame and draining women of their souls. Fan club organiser Erica tries to help, but she has no idea he’s not human.

Shifter Rex decides Erica is the one for him. And when a wolf mates, it’s for life. Erica has decided he had his chance, and he can now rock on… alone.