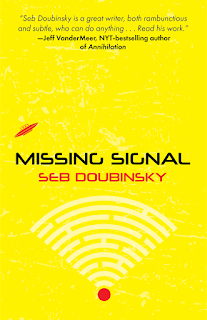 From Seb Doubinsky, author of The Song of Synth, The Babylonian Trilogy, White City, Absinth, Omega Gray, and Suan Ming, comes his highly anticipated next installment in the City-States Cycle. Missing Signal—a riddle wrapped in a mystery inside a government conspiracy? Agent Terrence Kovacs has worked for the New Petersburg Counter-Intel Department propagating fake UFO stories for so long that even he has a hard time separating fact from fiction. Especially when he’s approached by a beautiful woman named Vita, who claims she’s been sent from another planet to liberate Earth.

“A man claiming to be an ex-member of the ultra-secret Alien Containment Force, known as ACF or Force 136, has agreed to meet us in a secret place and tell us what is really going on behind the official UFO scene. Here is what he told us and it is terrifying.”

Terrence’s eyes moved away from the PC screen as he reached out for a cigarette. The man talking had a bad ’70s haircut and a drooping mustache. The other man sitting in front of him, half-hidden in the shadow, wore a pair of jeans and a loose red polo shirt. He had no watch. There were two cameras, alternating on the faces—one pimply, nervous and awed, the other dark, invisible and mysterious.

They even had the voice modified, for security reasons, but Terrence knew what it sounded like. He also knew that “the man claiming to be” wore a wig, colored contact lenses and a set of false teeth masking the real ones. The missing watch was an important detail: it made identification more difficult. A watch is a signature object. Like shoes. The man had also bought a type of shoes he usually never wore.

Terrence smiled, listening to the mysterious man speak, and looked down at some papers spread before him. He chewed on the tip of a pencil that served as a poor substitute for a cigarette and nodded to himself. All the necessary information—or rather disinformation—had been passed. Another worldwide alien conspiracy theory confirmed. The New Petersburg Counter-Intel Department had done an amazing piece of work.

Terrence patted himself on the back. Good job, officer. It had been a tough mission: he had really sweated like a pig underneath that horrible wig, and the new shoes had maimed his toes.

Do you want each book to stand on its own, or are you trying to build a body of work with connections between each book?
Both. I try to build a coherent “parallel” dystopian world in which city-states compete with each other, but each novel can be read separately. Of course, it’s more fun to read a few and see what characters re-appear and what happens to them.

What is your favourite childhood book?


All the Moomin books. Tove Jansson was a genius of mixing sweet stories and characters with scary and uncanny themes.  I think she could be easily seen as one of my biggest “secret” influences.

Do you read your book reviews? How do you deal with bad or good ones.
Yes I do. I am very interested to know what my readers and the critics think. Getting good reviews is always a pleasure, of course, Bad reviews can be hurtful, if I feel them unjustified, or constructive, if I can learn something from them. Which never happens, of course.

Have you read anything that made you think differently about fiction?
Yes, absolutely. Reading Michael Moorcock’s Jerry Cornelius stories or William S. Burroughs’ novels made me see that traditional narratives were only one way of telling a story. Recently, I discovered the British writer Ann Quin, which also awed me by her mixture of collage technique and hyper-realistic details. As a writer, I think it is very important for me to read books that push me forward, make me take risks. I can’t see writing as a safe process.

What kind of research do you do, and how long do you spend researching before beginning a book?
It really depends on the book. For Missing Signal, I went on a lot of conspiracy and UFO discussion sites to see how they worked and what sort of lingo they were using. That took me about three or four months. 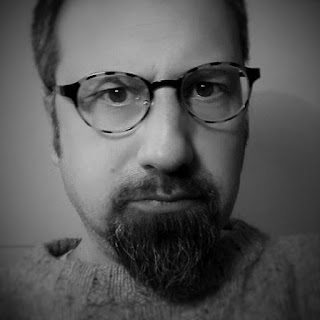 Seb Doubinsky is a bilingual writer born in Paris in 1963. His novels, all set in a dystopian universe revolving around competing cities-states, have been published in the UK and in the USA. He currently lives with his family in Aarhus, Denmark, where he teaches at the university.

a Rafflecopter giveaway
Posted by DanielleDuncan at 00:10