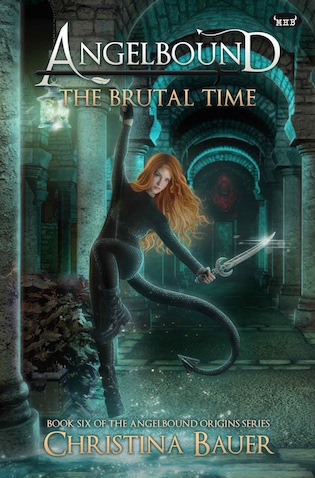 Myla Lewis loves kicking demon ass. Sadly, now that she’s the Great Scala as well as Queen of the demon hunting thrax, there’s no time to battle baddies. Sure, it’s great to rule alongside her main squeeze Lincoln—and their baby Maxon is adorbs—but what about some demon killing fun?
Then Myla gets a chance to fight tons of evildoers, but it’s in the worst way imaginable. All the demon-hunting thrax disappear, except for Lincoln. Even Octavia and sweet baby Maxon vanish. With the demon hunters gone, the worldwide population of big bads goes berserk. Talk about a nightmare.
Turns out, Lucifer left behind another magickal trinket that’s causing trouble. This time, it’s his signet ring that has changed the past, preventing the thrax from ever organizing in the first place. To bring back the thrax and their family, Myla and Lincoln must travel back in history—to the era called the Brutal Time—and try to convince the pre-thrax peoples to team up. Trouble is, these folks already have a powerful leader, the Red Scourge, and that creep doesn’t want his people hunting down demons. Nope. The Red Scourge has only one goal.
Kill Myla and Lincoln, fast.

Author Bio:
Christina Bauer knows how to tell stories about kick-ass women. In her best selling Angelbound series, the heroine is a part-demon girl who loves to fight in Purgatory’s Arena and falls in love with a part-angel prince. This young adult best seller has driven more than 500,000 ebook downloads and 9,000 reviews on Goodreads and retailers. The first three books in the series are now available as audiobooks on Audible and iTunes.
Bauer has also told the story of the Women’s March on Washington by leading PR efforts for the Massachusetts Chapter. Her pre-event press release—the only one sent out on a major wire service—resulted in more than 19,000 global impressions and redistribution by over 350 different media entities including the Associated Press.
Christina graduated from Syracuse University’s Newhouse School with BA’s in English along with Television, Radio, and Film Production. She lives in Newton, MA with her husband, son, and semi-insane golden retriever, Ruby.
Stalk Christina On Social Media – She Loves It!

Posted by DanielleDuncan at 00:04