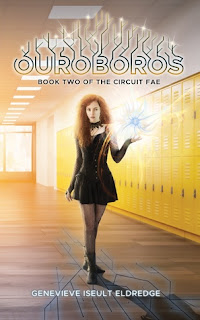 All introverted geek girl Syl Skye wants is to get close to her girlfriend. But when you can kill with a simple touch, a normal date night’s not really in the cards. As it happens, Syl is also a sleeper-princess of the fair Fae. Last year after a freak accident, her power Awakened, granting her white flame to purify the darkness.Rouen Rivoche is that darkness—a dark Fae princess whose power to bewitch mortals is as terrifying as the violet lightning she controls. Rouen is Syl’s total opposite. Her mortal enemy.She’s also Syl’s beloved girlfriend.And even though they joined forces to defeat the evil Circuit Fae who harnessed the killing magic in technology to take over the school…that was so last year.Now, Syl’s touch could mean Rouen’s death. Her increasing power is spiraling out of control, threatening to burn down everything she and Rouen have built together.Their lives, their love, their very world.

Fairies from different magic. Rouen and Syl are an unlikely couple. One dark and one fair fae. They are hoping for a quiet date night but evil forces don't give you a night off. The tables are turned in the second instalment of the Circuit Fae series. It's Syl magic that wants to harm Rouen, which is a bit of a problem when trying to date. Now Syl is the last sleeper princess, and her power is awake, more fae are interested in her. She has a new suitor that wants a piece of her and doesn't want her to spare a dark fairy. The mean girl at school Fiann isn't going anywhere and knows about the girls. She wants to help Rouen get rid of Syl and take her place by her side. This is a lesbian romance with a fantasy twist. I've joined the tour for book 3, Inimical is out in September 2018. I would say this series is aimed at the younger teen (16). I think they would enjoy the choice of language. It fits the age group of the girls. There is some high school drama in this instalment but it's mainly fantasy action. 3 stars out of 5. This series is available on Kindle Unlimited.