Resist and Serve Tour and Giveaway!

Rick Olmos's memories are scattered at best. The world he knew appears to be gone and its place, one of oppression, war and resistance. A desperate people wage a guerrilla war against a technologically superior enemy called The Directorate and the aren't exactly winning.

Rick's seen these odds before but more imporantly, he feels honor bound to save the person who saved him, a fierce resistance fighter named Gia. She put everything on the line to free him and he's not about to let her fate decide her future.

But The Directorate has put a plan in motion to eliminate the resistance once and for all. Rick finds himself in a position to help but he may have to forsake his own agenda to preserve humanity's last hope for freedom. 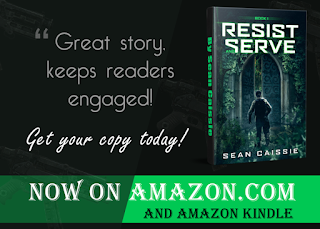 Gunfire echoed off the sunbaked stone walls, a rapid succession of shots followed by shouting. Such noise proved common in such provinces but when it came so close, an engagement might be seconds away. Civilians went about their business though they stayed close to the edge of the street, wary enough to know when they might need cover.
Richard Olmos turned to his team. They were a four man squad with a special assignment to take out a local warlord. Intel suggested he would be in that district, indulging a rare departure from his compound. A drone might’ve done the job but this situation required far more finesse.
The State Department made two things clear: no civilian casualties from explosives and no overt military action. That’s why Rick and his team weren’t wearing uniforms, though they still sported assault rifles in case things went loud. They were lingering around an old cafe, trying to look casual while scanning the area through mirrored sunglasses.
Rick and his guys ran more than thirty missions into the busy district. It always proved to be a logistical nightmare. People crowded the area at all times during the day and at night, it was a ghost town. They blended it in with their thick beards but even tanned up and leathery from a year working in the sandbox didn’t hide the fact they were a bunch of white men.
No one bothered them, though the weapons hanging off their backs may have had a lot to do with that.
A car started up nearby and Rick tensed, waiting for an explosion that never came. He’d seen so many improvised explosives and car bombs, he wondered if he’d ever get over the brief apprehension when someone cranked on a motor. It made him sad. He loved his Mustang back home and felt like he’d lose the joy of driving it.
Another spray of gunfire went off and it amused Rick that he didn’t even twitch a muscle to that sound. Weapon discharge was predictable. It had a singular purpose. Vehicles starting up shouldn’t be deadly but when they were, it was always a cheap, cowardly act. Terror through the sabotage of the common.
If someone wants to kill, Rick thought as he tried to shrug off a surge of rage, they should have the balls to do it face to face.
“I’d say twenty yards off,” Simmons said. “South and east.”
“Got it.” Rick nodded. He peered in that direction, thoughtful of the conflict building around them. He was about to say something else when chaos fell over the area.
Men charged out from down the street, firing AK-47s into the crowd of civilians. At first, it seemed like they were after Rick and his people but it quickly became evident they were there for something completely different. A terror campaign in their own city- a quick murder spree to spread fear and keep the people in line.
Rick readied his weapon, dropped to a knee and took aim. Unlike their opponents, he fired with precision, a single shot popping the skull of his first target. Another took a quick burst to the chest. His team followed suit, tearing through the enemies in short order but they kept coming!
“Contact left!” Marshall shouted, directing their attention behind them. Rick trusted his companion had it under control and kept shooting. They would be overrun soon and their real target hadn’t even shown himself yet. If they didn’t pull out and find a different position, they’d likely die near that cafe.
This might be why our man decided to come out today. He wanted to show the people he wasn’t afraid to get his hands dirty.
“Back through the cafe!” Rick shouted. “Out the back and loop around to the west. Go!”
Rick held the line as the others darted through the door. More enemies fired their weapons, bullets tearing through the stone causing tiny shards to fly in all directions. The dead and dying lay in piles. People screamed in misery and pain. Rick had seen it a hundred times before and he worried about numbing to it, about not caring, becoming de-humanized.
He knew he needed to follow his team, to get out of the area and follow the plan. Flank the enemy, finish them off, find the target and extract. That simple formula governed the vast majority of their missions. The terrorists they faced rarely enjoyed enough training to stand against even a handful of special ops troops.
But something kept him in place. Something made him watch their approach. Morbid curiosity would get him killed and he knew he needed to step away. A strange noise blared overhead, as if coming from an
incoming drone. He looked around as did those who were shooting at him. The guns didn’t stop but they should’ve. No one was firing.
The sound became rhythmic, a buzz mixed with something high pitch. He couldn’t see anything but it became annoying on a cellular level, making his skin itch and his head ache. Every part of him seemed to tickle, then hurt, like pins and needles dancing along every nerve ending.


No one around him seemed to experience the same thing. They simply stood dumbfounded, lost in the strange sound as it continued on, without any promise of ending. Rick’s head began to ache, his eyes burned and as he lifted his hands to rub his eyes, the world dissolved and darkened around him.

Sean Caissie has been a part of the Information Technology community for nearly 20 years. He studied at Seneca @ York with specialties in both computer security and networking. He also had comprehensive knowledge in computer engineering.

His latest passions outside of writing include hosting, designing and building mobile apps.

Currently, he resides in Toronto with his wife, 1yr old daughter and cat.