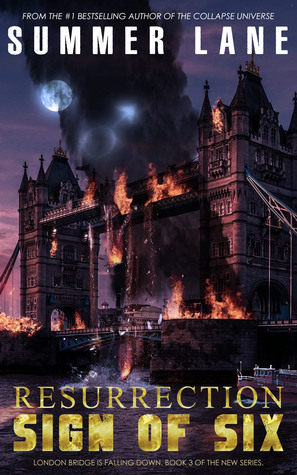 The third installment in the hit survival series, following the adventures of Cassidy Hart!
There are many words used to describe Cassidy Hart:
President. General. Sniper. Soldier.
Girl.
Now, just one word echoes through her head: Infected.
Cassidy Hart has been infected with a nanovirus that turns her own body against itself. As civil war with the technologically advanced Eastern Coalition and President Ayad begins to escalate, the need for more advanced weaponry and reinforcements arise.
When the United Kingdom makes Cassidy and the Western Republic an offer they can’t refuse, they board a plane to London to forge an alliance with the first known surviving European country they have truly communicated with since Omega’s defeat. Unknowingly, leaving their home turf may be more dangerous than they think…
Uriah True and Chris Young – two men whom Cassidy cares deeply for – will be pitted against each other in the most unimaginable way.
While Omega may be gone, loyalty to the cause remains. Yet a new, more dangerous enemy arises. An enemy who promises to reshape the known world. Omega was nothing. He will be everything.
Look for his sign. The sign of the sixth.
Heed his promise:
The end of the world was only the beginning. The worst is yet to come.
Even Cassidy Hart may not survive this time…or will she?
From Summer Lane, the #1 bestselling author of more than 20 hit books.

Goodreads / Amazon / Barnes & Noble / Amazon UK
—
EXCERPT:
I turn my back on Uriah, a man I love, but a man who is also more dangerously complicated than an armed IED. He doesn’t try to follow me. He knows better. In many ways, we are too much alike, and that makes our arguments predictable.
It also makes them repetitive.
I pull my jacket around my shoulders and I head to the trails that lead toward the glacier, away from the noise and activity of the base. I just need to be alone for a while. I need to clear my head. I am the president, and small arguments – even romantic relationships – cannot be allowed to distract me from my job.
I wander through the gravelly, dirt trails, the frigid temperatures pinching my cheeks, turning them red. I pick my way through slick shale and sparse shrubbery as I get closer to the glacier itself, blue and white and crusted with dirt. Truth be told, up close, the glacier looks like a sea of aged snow clumped in a massive pile, something that needs to melt into the landscape but never does.
I stop at the edge of the glacier, standing on an outcropping of rock. Here, away from the noise of the base, despite being protected inside its perimeters, I get a small semblance of silence and peace. The glacier rises up into the mountains that surround the base, stretching for thirteen long, frozen miles.
I sit on the rock and pull my knees to my chest, wondering what the nanobots are doing inside my body. I know that in Clare and Jay, deviating from their programmed directive would result in their immediate death. But what is my directive? What has Ayad programmed these bots to do? Are they going to kill me if I try and pick up a gun? Are they going to shut me down if I attempt to give a speech? As president of the Western Republic, there are a million everyday tasks that could result in my potential termination.
Am I supposed to pause everything until our doctors can figure out how to remove these things from my body? I press the palms of my hands against my forehead.
That’s exactly what Chris wants me to do. Press pause.
Hang back and wait until they figure this thing out.
So not my style. If patience if a virtue, then I’m the most non-virtuous person on this planet. I don’t want to sit around and wait for Ayad to kill me. If I’m going to die, I’ll die doing the same thing I’ve been doing every day since the Collapse: fighting.
Fighting for the simple freedom of taking a walk and admiring a glacier.
These are the things that will be taken from us if Ayad or the EC dominates the Western Republic in this already too-bloody Civil War. I cannot allow that. We already destroyed Omega and their strongholds across the globe during the Last Stand. Ayad may be clinging to shreds of Omega religion and loyalties, but that alone is not enough to resurrect their full might. He relies on deception, trickery, and propaganda to rally people to his cause.
A movement based on deception can be brought to its knees.
The only question is…how?

Author Bio:
Summer Lane is the #1 bestselling author of more than 20 hit books, including the popular Collapse Series and Resurrection Series, featuring feisty heroine Cassidy Hart. She owns Writing Belle Publishing and Writing Belle, an online magazine. Lane is also an established journalist and writing teacher.
Summer lives in the Central Valley of California with her husband, Scott, and their two German Shepherds, Kona and Gibbs.