Forever Better Together Tour and Giveaway! 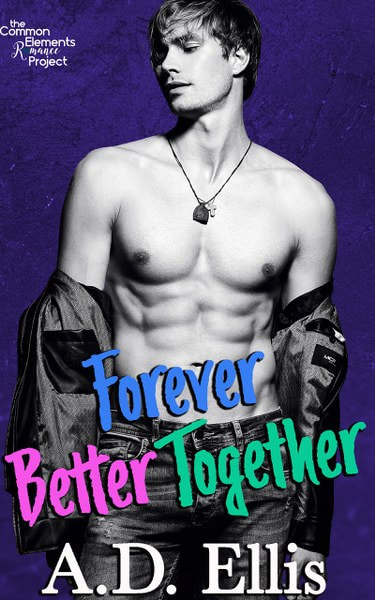 Can best friends find true love? What if your best friend is your adopted brother?
Griffin can’t fathom his life without Quincy, but he also can’t ignore the crazy sexual attraction buzzing between them.
When Quincy offers up a contract to determine if the sexual tension brewing between them is worth jeopardizing their nearly decade-long friendship, Griffin finds himself helpless to say no.
Will they lose everything they’ve found in each other, or will they seize the opportunity to turn their friendship into something even better?
Forever Better Together is a male/male opposites attract, friends-to-lovers story with delicious sexual tension, a sizzling hot striptease, and emotions guaranteed to punch you in the gut.

I grabbed my phone from the pocket of my hoodie. Empty Chinese containers littered the coffee table as Dad and I watched a movie, but he was absorbed in his computer, and I had no idea what the movie was even about. I pulled up Griffin’s number and sent him a text.
Me: You having fun, bitch?
Griffin: Yeah, where are you?
Me: My dad’s.
Griffin: Again? Damn, man, sorry.
Me: Yeah, for the week. It’s not bad.
Griffin: Awww yeah, I get the room to myself.
Me: Jack off all you want.
Griffin: Nah, it just means I get to watch Disney movies and cry without you making fun of me.
Me: And jack off.
Griffin: Okay, and jack off.
I snorted.
Griffin was my brother and best friend.
Okay, he wasn’t my blood-related brother, but that didn’t matter to me. He was my brother in all the ways that mattered. We were sixteen, but we’d known each other since we were ten. He became my brother when we were twelve.
“What are you over there snorting about?” My dad, Max, removed his glasses and looked away from his work like he really was interested. He was a great guy, and I loved him, but he had a bad habit of getting too involved in his work and forgetting his family.
“I was talking to Grif, and got to thinking about how much we clashed when he first moved in.” I shook my head.
“Oh, Momma and Pops told me how terrible you guys were at first.” Dad laughed. “Glad you finally decided to get along. Pretty sure Momma would have kicked both your asses if you hadn’t.”
“It wasn’t like we hated each other; we just clashed. We had absolutely nothing in common and Momma threw us together and basically expected two ten-year-olds to work out their differences.”
“Well, you two must have done a pretty good job since he’s your best friend. Momma usually knows what she’s doing.”
“Yeah, she sure called it right. I never would have believed it then, but it worked out.” I smiled at the thought of when I first met Griffin.


Griffin didn’t say anything, but I thought he looked pleased with the idea. 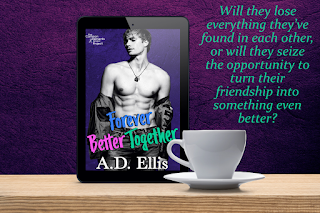 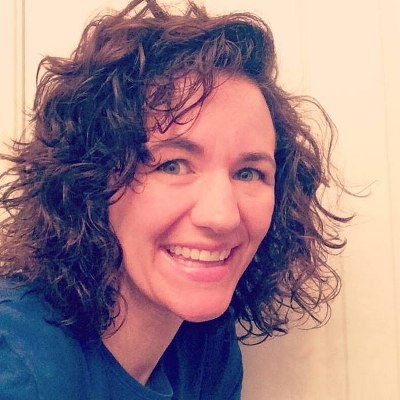 A.D. Ellis is an Indiana girl, born and raised. She spends much of her time in central Indiana as an instructional coach/teacher in the inner city of Indianapolis, being a mom to two amazing school-aged children, and wondering how she and her husband of nearly two decades haven't driven each other insane yet. A lot of her time is also devoted to phone call avoidance and her hatred of cooking.


She loves chocolate, wine, pizza, and naps along with reading and writing romance. These loves don't leave much time for housework, much to the chagrin of her husband. Who would pick cleaning the house over a nap or a good book? She uses any extra time to increase her fluency in sarcasm.